It looks like we are not the only one whose joy had immediately turned into despair when trying to get into a game. While we were able to play some matches earlier, others have been less fortunate and have been waiting for HOURS to get a game.

The problems have been confirmed by the Xbox team as well, as we can see that there has been an official update on the Xbox Live status page. The message from Microsoft is as follows below:

“Xbox members, are you having a tough time matchmaking in Halo: The Master Chief Collection? As you read this message, we’re working with our external partner to correct this issue right away. We appreciate your patience in the meantime! We’ll update you again when we have more information.”

Hopefully the problems will be fixed in a matter of minutes rather than hours though. It’s hardly the perfect start to a major Halo game launch. 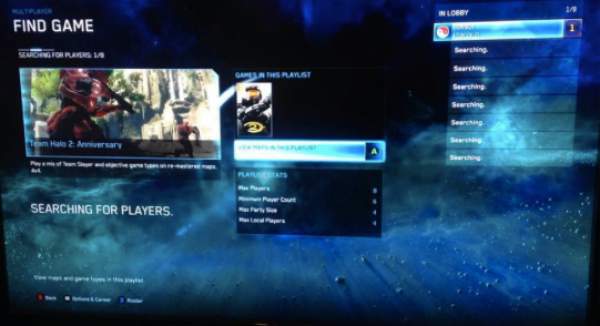 Above is an image of the screen that most of you are probably sick to death of seeing at the moment – is this you right now?

Let us know if you are having Xbox One matchmaking problems on Halo Master Chief Collection in your area at the moment. Since picking up your game at launch, how many hours roughly have you managed to play without issues?