Only the biggest titles get a lot of attention for late night pickups in both the UK and USA. Halo 5 Guardians midnight launch locations will now be hunted for GameStop in USA and UK store locations, especially considering the release date is the same globally and set at Oct 27, 2015 on Xbox One only.

There’s a lot of confusion right now in regard to what GameStop locations are doing a Halo 5 midnight launch and also Microsoft stores. There’s a few MS stores holding Guardians tournaments in celebration of the new game and these have prizes up for grabs, but what about midnight releases at GameStop? Recent forum threads like this are common due to fans wanting to know where the best place is to get a boxed copy with a late event. 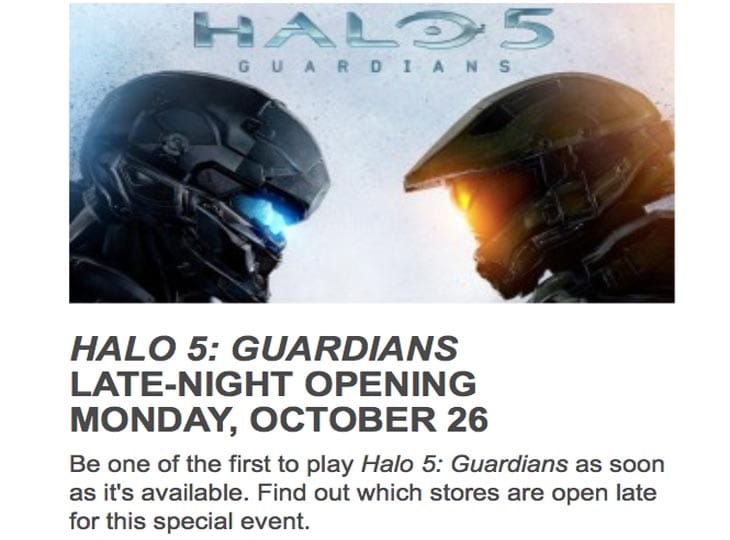 That particular posting is looking for Halo 5 midnight release locations in Toronto, although they wonder why not “every GameStop” doesn’t have a midnight launch when compared to the hype surrounding Halo 3 a number of years ago. This person isn’t alone in looking for information about 12:01am release events on October 27th.

If you popped into your local game store, then you might have asked and received the message “not sure”. This has led some people to think there’s “too little Xbox One owners” in comparison to Xbox 360 when Halo 3 released. While this is just speculation from those wondering what’s going on, we have seen plenty of events mentioned in the UK.

There’s also the possibility that the further we move into the digital age, only major city locations will get a Halo 5 midnight launch due to more people downloading online. You can see the official GameStop events page with no mention of Halo 5 here, although they are holding special Guitar Hero social events getting people in-store taking photos.

Best Buy Halo 5 Guardians Midnight Launch – This store has made it clear where they are holding a so-called “late-night opening” on Monday, Oct 26. You can find details about Best Buy’s store events across the United States at this page, which doesn’t include all stores but a handy drop down list will narrow your search quickly.

Is your local GameStop or Best Buy holding a Halo 5 Guardians midnight launch event? If so, what’s the location?