One feature which we are looking forward to when Forza 4 arrives later this year is called Autovista, this will allow you to use Kinect or your controller to explore vehicles inside and out and find out more details about certain features – we have now heard that a exciting vehicle from Halo 4 will make an appearance.

Yes, that’s right the ever-popular Warthog will show up in Forza 4, now before you get too excited please note that you will not be able to drive the Warthog in the game, however a well-hidden Easter Egg will let you take a closer look at Halo’s iconic battle jeep. We have embedded an images showing this below, you can see more image via this link. 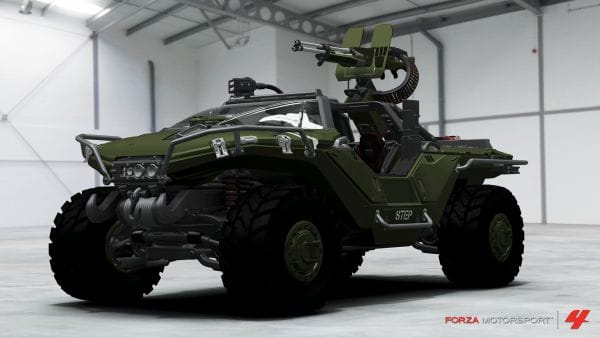 When it comes to Halo vehicles the Warthog is considered as the fan favorite, with a machine gun mounted on the rear and four wheel steering it packs both firepower and maneuverability – it is just a shame that you won’t be able to unlock it as a playable vehicles as we remember Toca Touring Car Championship where a cheat could unlock a tank, this certainly added another dimension to the game.

When viewing the Warthog in Autovista mode you will hear narration from Halo’s central character Cortana, apparently she will talk about the vehicle’s prowess and tell stories – we are sure that this will interest hardcore Halo fans and we expect high levels of detail. We can confirm that when taking a look at the Warthog you will be able to open the door, sit in the driver’s seat, start it up and even pop-up the hood – it sounds awesome!

We think that it would be nice if other vehicles from popular games turned up in Autovista, obvious choices include the Batmobile, the Mako from Mass Effect and the Buggy from Final Fantasy VII – feel free to add your suggestions in the comments section below.