It looks like we may have the information that all Marvel Future Fight players have been waiting for. Earlier this week we spoke about the upcoming Future Fight Halloween 2015 update for new costumes.

Now it seems like four are definitely on the way. An early image has been found over in Korea and assuming it is true, we can tell you that Modok, Punisher, Black Cat and Ghost Rider will all be receiving new costumes for Halloween.

We’re not sure about Black Cat and Ghost Rider’s suits yet, but based on the image below we could be seeing Spider-Modok aka Spidoc in the game, along with Noir Punisher. 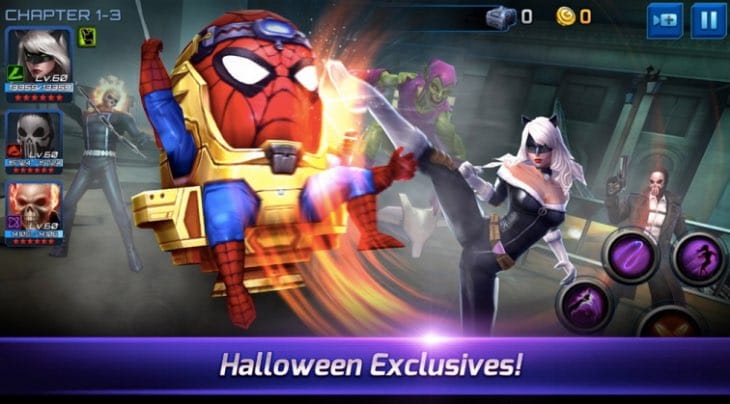 Again, we can’t say for sure whether the image above is real but it looks like it is since the source is reputable. Netmarble has already confirmed that new Halloween costumes are coming as well don’t forget – so it is looking hopeful.

While some of you may be disappointed with no suit for Blade, what are your thoughts on the costumes shown in the image above – can you name them all?

Also, we see Green Goblin in the image, but he looks the same suggesting that he won’t be getting a costume. Once we have more details we’ll let you know.