Years ago Halloween costumes were required to be based on the undead and all manner of scary characters, but now it is more of an excuse to dress up wearing whatever springs to mind, and we love seeing fancy dress costumes dedicated to the gaming world. Halloween is one of the only times of the year people get to dress up in various costumes those based on video games are becoming a popular occurrence.

Today we are looking at a couple of sites that have video game costumes for sale among others, and we are interested in what fans think are the better costumes out there. Costumes nowadays look like they are better made than they used to be and less tacky, so turning up at a Halloween party dressed as Mario will not give people the impression there is a plumbing situation anymore, although we are sure this could be a great way to start conversations.

On the Buy Costumes website a large amount of video game outfits can be seen for a reasonable price with many around the $30 mark, although we are quite taken by the adult $189.99 Assassin’s Creed Ezio costume. While some expect by paying nearly $200 the quality should be better, some may feel that a costume like this can be worn on many other occasions like video game events or other fun activities.

Children wanting to dress up like their favourite characters can get some great deals and the aforementioned site has offers like the Deluxe Crusher Skylanders child costume available for Pre-Order at $34.99, while the Sonic the Hedgehog version is only $26.99.

Whether you want a Super Mario Bros. costume or Mortal Kombat one there are plenty of video games orientated costumes to choose from, and those willing to spend a bit more are bound to find more quality outfits, although the $829.99 Halo 3 suit may look good, but it is a bit on the pricey side for something you may only wear a couple of times.

If I paid that much money for a costume I would want to wear it all the time, yet some may feel this could be brought out on a number of occasions or lent out or even swapped with others organizing a fancy dress party.

Another website that has some reasonably priced video game outfits is Costume Craze and their selling point here is that “video game character costumes are not just for Halloween“, which reiterates our notion that these costumes can be used for a number of occasions, even non-school uniform days.

In some cases a decent costume can earn its money back, as I have spoken to a few friends on mine that have gone to Leicester Square in London for a few hours at the weekend and found plenty of tourists are willing to make donations just to see someone like Pac-Man standing there for a few hours. 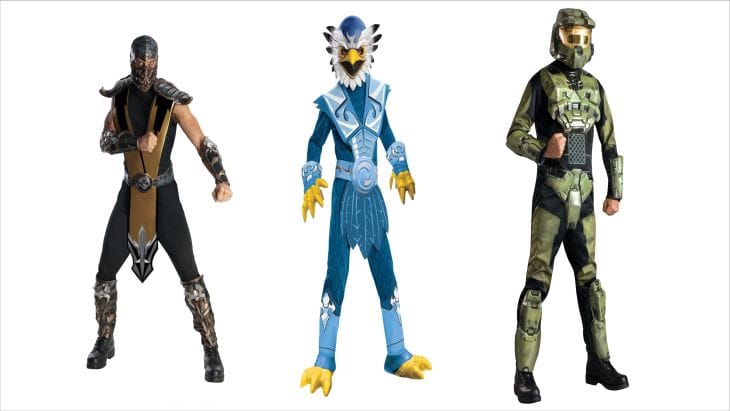 When it comes to choosing the ideal outfit video games are an great choice, as there are many gamers out there who appreciate this, and they also stand the test of time. Whether you want to be Raiden from Mortal Kombat or you want to dress your little one up as an Angry Bird, fancy dress outfits are fun for all ages and ideal for that upcoming Halloween party. The aforementioned sites have plenty on offer that you may find enticing, so we can see Halloween Costumes video game characters being a popular choice this Halloween.

What would be your favourite video game character to dress up as? I am contemplating getting the Mortal Kombat Sub-Zero costume which is on sale for only $44.65, it would be fun to turn up to something like a doctor’s appointment wearing it saying “doctor, I just can’t get rid of this cold.”