Up until a few days ago, the possibility of Valve revealing any sort of official details for uber-expected Valve title Half Life 3 would be slim to none. However, a recent image showing a Valve employee in a Half Life 3 t-shirt has well and truly kickstarted the release bandwagon with gamers getting pumped for a potential announcement.

Let’s start with the news about the T-shirt shall we, as Twitter user Ekanaut posted an image of the unnamed Valve employee sporting the Half Life 3 tee at a recent Seattle developer event, as reported from VG247. According to Chandana Ekanayake, the user responsible for the Twitter account he had been given ‘permission’ to take the picture by Valve, obviously implying that the company did not mind him taking a picture of a Valve employee being associated with the words ‘Half Life 3’.

So, was this Valve’s way of sparking mass fan excitement by revealing the t-shirt in preparation for an official announcement, or was it simply a ‘troll’ by the company, designed purely to tease fans? Surely Valve wouldn’t do such a thing would they?

Now then, a report we’ve read over at StickSkills reveals that Half Life 3 could be the surprise announcement at this years Video Game Awards. You may remember that at last year’s event, Bethesda’s Todd Howard took to the stage to announce the next Elder Scrolls game Skyrim much to everyone’s surprise, so the VGAs are definitely building a reputation for bombshell game announcements and Half Life 3 would certainly fit in that category.

Apparently, a Half Life 3 teaser trailer will be shown at the 2011 VGAs and Valve will reveal a release date for the game shortly afterwards. Combine this rumor with that Half Life 3 t-shirt picture and we have a very exciting rumor for sure. The VGAs will take place on December 10 this year on Spike TV, so make sure you are tuned in and strapped in for a potential night to remember.

If you are a die-hard Half Life fan, what are your thoughts on the Valve t-shirt and possible VGA announcement whispers – do you think it will happen? 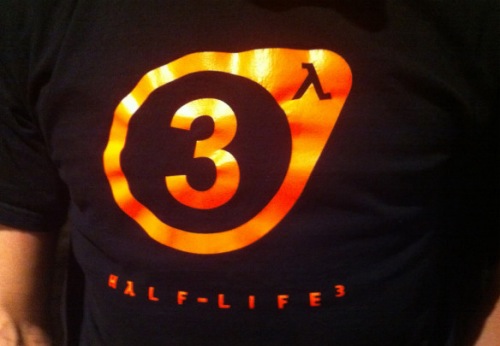