Just over a month ago I was informing our readers that a new DLC pack had been released for the Guitar Hero: Warriors of Rock game, which provided gamers with another 5 tracks. However, we have just received news that another 10-song DLC pack has just been made available.

According to a recent vg247.com article by Stephany Nunneley, Activision has just announced the arrival of the January Mega Pack DLC for Nintendo Wii, PS3 and Xbox 360, which is said to include three songs by the Nine Inch Nails — Head Like a Hole, The Hand That Feeds and Closer.

The pack also includes Buried Myself Alive by The Used, Wings of Butterfly by HIM, Rescue Me by Hawthorne Heights, We Got a Situation Here by The Damned Things and All I Want, The Downfall of Us and 2nd Sucks, which are all songs from A Day to Remember. 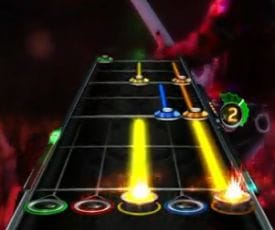 You can either buy all the new songs together in the pack, which will cost you 1440 Microsoft points/1800 Wii Points/$17.99, or buy them individually for 160 Microsoft Points/200 Wii Points/$1.99. If you haven’t got the Guitar Hero: Warriors of Rock game yet, now might be a good time to buy it.

As Christopher Rick over on the gamersdailynews.com website reports, Activision has just dropped the retail price of both the Guitar Hero: Warriors of Rock and DJ Hero titles. You can now buy the GH: WOR game for $49.99, the guitar bundle for $79.99 or the band bundle for $159.99.