If you own a copy of Guitar Hero: Warriors of Rock, you’ll know that there’s already quite a wide variety of tracks to choose from including ‘No Way Back’ by the Foo Fighters and ‘Bleed It Out’ by Linkin Park. Now you can have a few extra songs to choose from, with the new ‘90s Rock Track Pack.

According to Stephany Nunneley over at vg247.com, Activision has recently added some brand new hits from the 1990s to the Warriors of Rock game, including ‘Plowed’ by Sponge, ‘What’s The Frequency, Kenneth’ by R.E.M., and ‘Real World’ by Matchbox Twenty. 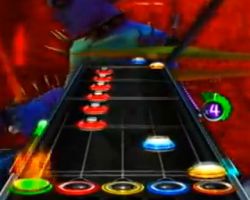 The other two songs included in the pack are ‘Name’ by The Goo Goo Dolls and ‘Sex and Candy’ by Marcy Playground.’ All of the above songs are now available for the PlayStation 3, Xbox 360 and Nintendo Wii for $1.99/160 Microsoft points/200 Wii Points per track.

However, if you’d rather just purchase the full set of songs at the same time, then the ‘90s Rock Track Pack is available for $9.49/760 Microsoft Points/950 Wii Points. Do you want any of the news songs? If so, will you be purchasing the whole pack or just a few songs individually?

If you’re a fan of Guitar Hero: Warriors of Rock, you may have read our previous article about the customizable guitar peripherals. Have you customized your guitar controller?