If you watched Brazil Vs Mexico highlights during the FIFA World Cup, you’ll know that there was one man who received the headlines. It wasn’t Neymar, but Mexico’s goalkeeper Guillermo Ochoa who produced some amazing saves to keep the Brazil Vs Mexico result at 0-0.

FIFA fans back in the UK though may be very interested to hear that this is the same goalkeeper that has actually been linked to a move to the Premiership. Guillermo Ochoa transfer 2014 whispers suggest that he may be on his way to Liverpool FC, which would be a very surprising move considering how good Simon Mignolet is.

There’s no denying that Ochoa to LFC would be a popular move though, although we still don’t see it happening with Ochoa himself saying that he would need to play in the Champion’s League – surely he won’t replace Mignolet as the number one keeper after a solid season?

Either way, fans are already getting excited about seeing Ochoa on FIFA 15 and some fans are already predicting a major stats upgrade. At the moment, the keeper has a default overall rating of 78 on FIFA 14, but has already earned himself an inform rating of 80 in Ligue 1.

Guillermo Ochoa is going to be the new casillas in FIFA 15.. tbh

Even better, EA has already awarded Ochoa with a 81 rating specifically due to a Man of the Match in last night’s game Vs Brazil. We have confirmation of this below as you can see in his special green World Cup card on FIFA 14 World Cup Ultimate Team for Mexico. 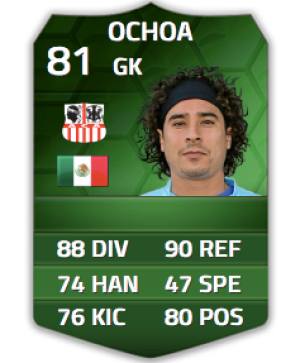 As a daily FIFA player, do you think Ochoa needs to move to the Premiership next season? That performance against Brazil could increase his valuation tenfold. If he does move, are you predicting a significant upgrade by EA that is higher than 78 for FIFA 15?

Remember that EA are already watching this player as highlighted in his special MOTM card. Enjoy the Guillermo Ochoa amazing save in the World Cup 2014 again above and let us know your thoughts on this player.

LFC fans, should Ochoa replace Mignolet at LFC or not?