We are just days way from GTA V arriving on PS4 and Xbox One platforms. For those playing on PS3 and Xbox 360 though, it has been a frustrating experience, with Rockstar yet to issue a single expansion as GTA V story DLC – one year later.

Instead, Rockstar has taken the unusual path of releasing smaller pieces of DLC content ever since the game launched, content that has arrived at no extra cost.

It’s unusual to see a developer give away so much DLC content for free, but that is what Rockstar has done by so far ignoring any story player expansions, or cashing in on some GTA V zombie DLC for Halloween.

It has now become apparent that they are saving their best content for next-gen and this week we have some rumors suggesting that the first GTA V Story DLC could involve a new side plot with Franklin. 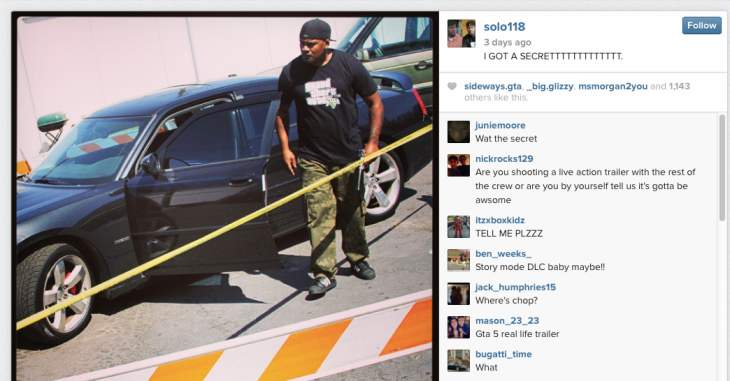 We say this, as a very interesting image has turned up from Instagram, from Shawn Fonteno who just happens to be the actor who portrays Franklin in the game.

He has left a very interesting image on his Instagram account, along with the caption “I GOT A SECRET’. The image shows Fonteno in a GTA V top, holding a pistol in an apparent mock up of a car chase / heists scenario.

He’s obviously released this image as a teaser to fans so it essentially translates to a piece of content in the game that Rockstar are about to announce.

Is this part of the story DLC for GTA V that Rockstar has been working on for a year? It didn’t take this long for the two DLC expansions for GTA IV to release so it has to be something good.

Right now, we know that Rockstar will be focusing on the next-gen launch next week. Let us know your thoughts on this teaser image though from the man who plays Franklin in the game and what you think it means.