Those of you who are planning to get GTA V on PS4 are in for a treat now, as we have a fantastic video for you to watch, comparing the GTA V PS4 trailer Vs PS3 which shows the exact differences in graphics quality between the two platforms.

The differences that Rockstar have shown are quite astounding as well, ensuring that PS4 owners are going to be getting an amazing looking game that Rockstar was keen to point out at E3 was captured directly on PS4 hardware.

We haven’t seen the Xbox One version of GTA V yet, but if it looks anything as good as this then the wait for GTA V next-gen is going to be well worth it. Don’t forget that since we have seen the PS4 version of GTA V looking amazing, then it also suggests that GTA V on PC will look even better – especially when texture mods come out.

For now, sit back and enjoy a frame by frame slideshow of every single GTA V scene in the trailer, on PS3, PS4 and then both running side by side. It really is amazing to see the level of detail on the two platforms – particularly the free flowing traffic that Rockstar has managed to now implement on PS4. 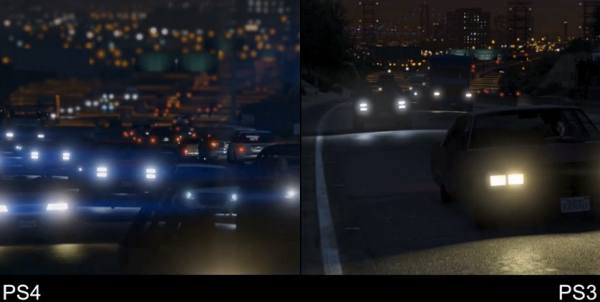 How good does Franklin look too walking down a busy street with Chop and cars in the background, compared to PS3 which was a more subtle affair? It’s just one of the striking differences which you’ll spot when comparing both scenes.

Take a look and let us know how impressed you are. Are you willing to buy this game again on PS4, even if there is no upgrade incentive simply because it looks so good?