We knew we would see GTA V PS4 leaked before the November 18 release date, but we didn’t expect to see the game leaked so early. Some of you may already know it, but a GTA V PS4 Twitch stream has turned up and as a result, numerous GTA V PS4 leaked gameplay videos.

With gameplay slipping out early, the temptation is always going to be there for those who just can’t resist taking a peek at the final product. We’re all human after all and we are talking about one of the biggest launches of the year, if not the biggest.

We can see that Take-Two has now been frantically trying to shut down all footage of the game, whether that involves Twitch streams of GTA V, or early GTA V PS4 gameplay on YouTube. 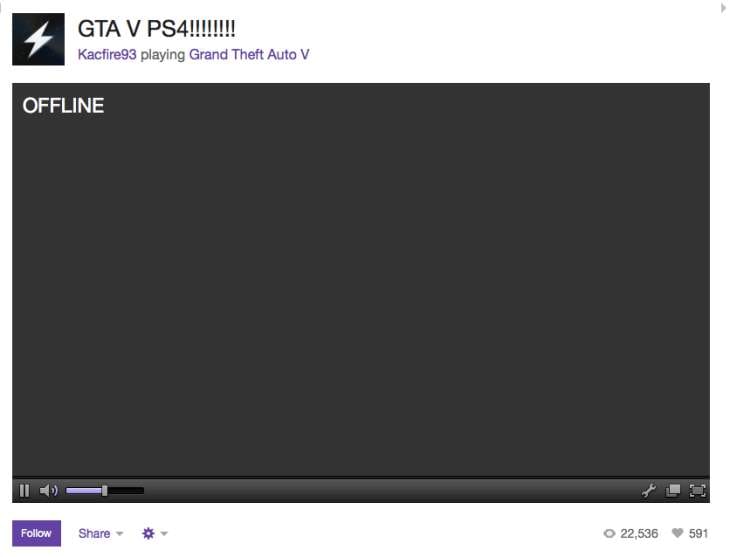 As you can see from the image above though, over 20,000 gamers have already had a naughty look at next-gen GTA V on the PS4, as one user who obtained an early copy wasted no time in setting up a stream.

While Take-Two has already managed to remove most of the incriminating evidence, we know how fast YouTube works and we can already see that duplicates are available.

We’ve added one below in case any of you can’t wait, but we warn you it will probably get taken down soon and the quality is too bad anyway in our opinion so you should all wait until the 18th.

How do you feel knowing that many gamers are already playing GTA V on PS4, one week before the street date? How on earth do these people manage to pick up copies so early?

Be honest, did you take a sneak peek at the stream last night?