The official Rockstar Games service status page reports that Grand Theft Auto V servers are down today, on June 18. While the Xbox One and older Xbox 360 console have no problems, according to the status page, we are seeing yellow warnings next to the GTA V status icons for PS4, PS3, and PC.

Rockstar say they have “received reports of issues” with the said platforms, and are investigating the issues right now. Product Reviews received feedback from our readers asking when will GTA servers be fixed, especially considering they’ve been down for around an hour on PS4 at least.

While the official status pages don’t report Xbox One issues, one of our readers just told us that “GTA 5 on Xbox One keeps saying, wont download saved file”. Another added, “The GTA V servers are down on PS4, I can’t connect to online play on June 18, 2015”. 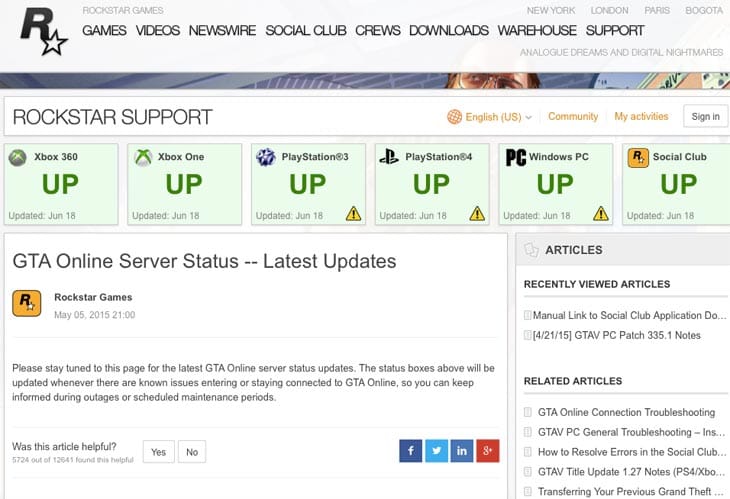 The screenshot above reveals the yellow alerts for Rockstar cloud services and we took this just a few minutes ago.

Is GTA V online down for you today and if so, what platform do you have server problems on? If you have connection issues, then let us know the error messages and country you are in to see if this outage is isolated to one region.

This story is developing and we have reached out to Rockstar Games for more information on when the GTA V servers will come back up.