Since the last GTA Online PC update, there has been a number of complaints from users who say that their GTA Online PC framerate keeps dropping.

Now, we can see that Rockstar has officially responded to the complaints and have now said that their team is investigating the reports.

To recap, Rockstar recently dropped Part 2 of the Ill Gotten Gains update on all platforms, that being the GTA Online 1.28 update on PC specifically. 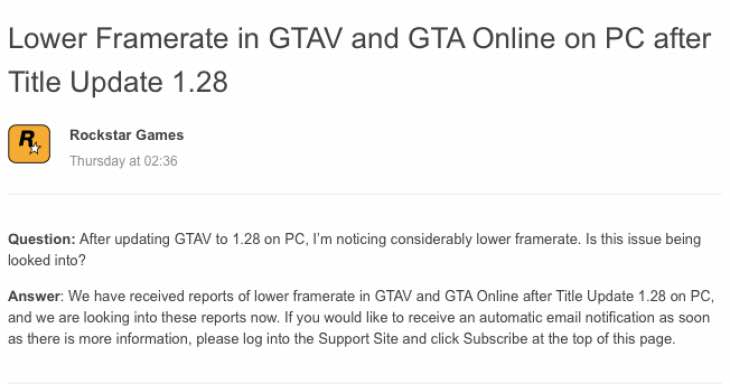 You can see Rockstar’s response above, but the main discussion is over at Reddit which suggests that the reason for the lower framerate is because of Rockstar’s attempt to reduce hacking – inadvertently affecting the modding scene.

If this is confirmed to be the case, Rockstar should be bringing out a fix soon either with a hotfix or in time for the GTA V Online 1.29 patch.

Let us know your thoughts on this and if you have noticed anything different with regards to framerate after the last patch.