We know that many of you are going to be unhappy once again to find out that the GTA V Lowrider update is not coming out on PS3 and Xbox 360 platforms.

This has been reiterated by Rockstar who has said that the PS3 and Xbox 360 hardware is no longer good enough to support their new content releases.

We saw this with the Ill Gotten Gain updates and now it means that the Lowrider update won’t be available either.

On top of this though, it also suggests that the upcoming Halloween update will only be for next-gen and PC as well. In other words, it is highly likely that the GTA Online Halloween DLC update won’t be out for PS3 and Xbox 360.

Rockstar has already shown with the Lowrider and the Ill Gotten Gains that content updates for PS3 and Xbox 360 are coming to an end.

With nice new additions such as the Machete and Flashlight on the way though, it is still going to be upsetting for those with the PS3 and Xbox 360 versions to find out that they won’t getting it. 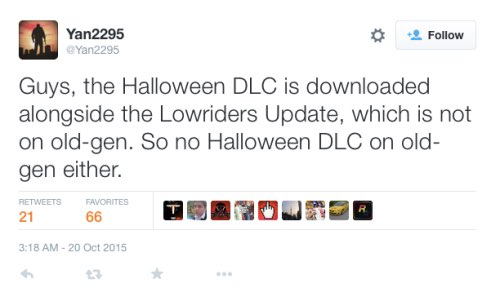 Expect confirmation of this from Rockstar in the coming weeks. Give us your reaction to this and if you are upset to find out that you may not be able to play the Halloween content on top of no Lowrider update on your PS3 or Xbox 360 console.

Is it finally time to upgrade that old console and move up to next-gen like the rest?