The hunt for Grand Theft Auto V’s rumored Jetpack has created a massive debate over its existence and some people believe the mystery might be solved be looking in hard to reach locations. Some of these, like Army Bases, will put you in danger of dying and you would certainly only have seconds to look while being hunted by the military.

One thing is for sure, the GTA V jetpack hunt can be made easier when using the god mode cheat. There’s many cheats in GTA V and some people thought invincibility, AKA god mode, was stopped after patch 1.10 but this isn’t the case in single player. We just tried the god mode cheat with the GTA V 1.11 update installed, and it worked just fine although you get the normal 5-minute countdown clock.

You can see the code to use on PS3 and Xbox 360 below, which lasts for 5 minutes and you can reactivate the mode again by putting the code in as it starts to reach zero.

Is the GTA V Jetpack real? This is a good question that only Rockstar know the answer to at the time of writing. We included a video below this article, which explores that very question and looks at the latest evidence about where the GTA V Jetpack location might be.

It really is hard not to believe there’s a jetpack in GTA V after watching the video, and if it really isn’t in the game right now then we could see the jetpack added via future GTA V DLC or by opening a new area of the game like the prison. 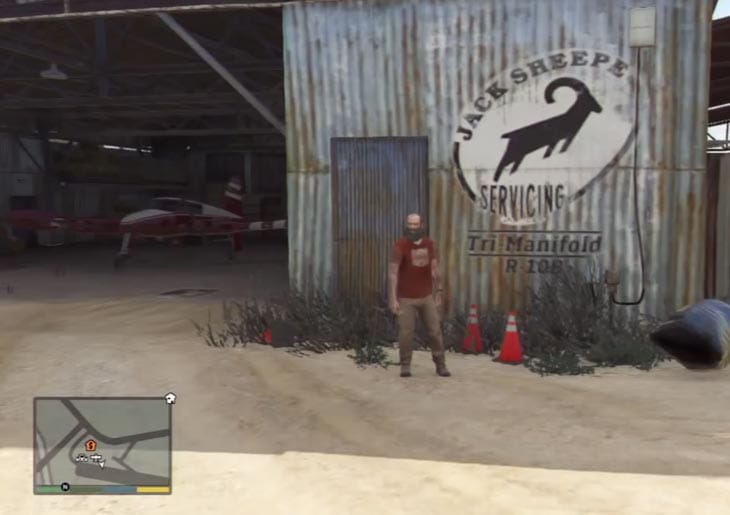 The screenshot above was taken from the video below this article and a lot of attention has been put on the writing on the side of that hanger. If you haven’t listened to clues within that text, then you should really watch the video for some insightful comments. Rockstar has certainly got a lot of players thinking.

If you are on the hunt for the GTA V jetpack and believe its location is still to be found right now without DLC, then one way you can be helped is by using the god mode cheat at certain times in your exploration. We only hope if there is a jetpack, then it’s still accessible with the cheat enabled.

Do you believe GTA V has a jetpack and if so, have you been on the hunt? Or do you think it doesn’t exist and might be added to the game later on?

The hunt has been going on since the release date and we reported about the secret remaining unsolved towards the end of last year. Since then, a lot of clues have been found like you can see in the video and we personally believe the jetpack will turn up in GTA V at some point.