We have some important news for those of you who are planning to pick up the digital version GTA V on PS4 when it lands next month. Some early intel has now revealed the GTA V install size on PS4 and as expected it is going to be a massive file.

We have seen other PS4 games come close to the 50GB area and now it has been confirmed that Grand Theft Auto V will have a 50GB minimum game save file on Sony’s next-gen system.

Now you know why the PS4 ships with a 500GB hard drive compared to previous generation and we’re guessing a lot of you will soon be seriously considering an upgrade to more storage. 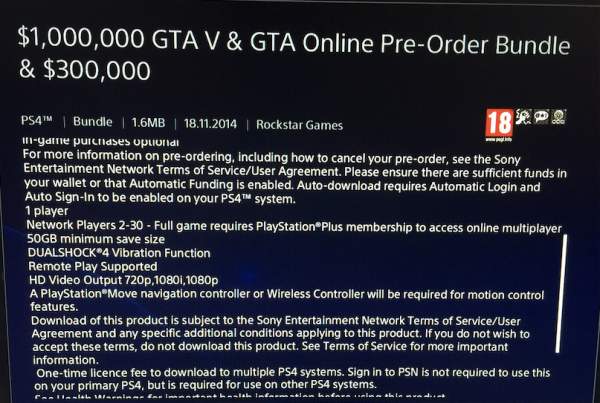 The discovery was made after the listing for the PSN version was uploaded online. Just for reference purposes, the same information also confirms that there will be support for 2-30 players online.

One potential difference between GTA V PS4 Vs Xbox One, is that we also see this listing mention motion support for the PS4 version. The PlayStation Move accessory is also name dropped, so this could be a potential feature that Sony are on the verge of announcing.

How does GTA V with the Move controller sound to you, do you still have yours handy? 50GB now appears to be the standard for all new PS4 game installs. Let us know if you are considering upgrading that hardware to 1TB before the end of the year with plenty more massive games on the way.