It is pretty exciting seeing the recent Grand Theft Auto 5 news from Rockstar and Game Informer that confirms solid details are incoming for next month, which is when we’ll get to see the December magazine cover. Other than this there hasn’t been a lot of real news surrounding GTA V, although knowing that certain editors received an exclusive demo has teased a few gamers over the last couple of days.

If you’ve been following the Golden Joystick Awards for 2012 and also voting for certain games, then we wonder if you’ve stumbled across the One to Watch category? For us this is one of the most exciting categories thanks to some massive titles on the way in the coming months, which features Black Ops 2, Halo 4, Crysis 3, Star Wars 1313, ZombiU, and many more including GTA V of course.

GTA V the One to Watch — for us it has to be the next Grand Theft Auto game that’s the one to watch, and while we agree that there’s some major titles in this Golden Joystick Awards category, how can they top a game like GTA V with its massive fanbase and also the fact that it has been in the making for years. You can see a photo below that highlights the major games in this category, and also place a vote for GTA V via this page. 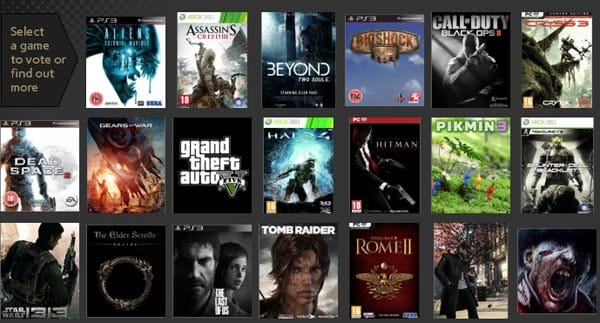 Are you voting in the 2012 Golden Joystick Awards, and do you consider GTA 5 as the best title in the One to Watch category? It is worth noting that you only have another 7 days left for voting, so if you want to take part then make sure you place a vote soon. The Golden Joystick Awards this year will take place on the 26th of this month, so not long now to find out what games top each category, and our vote has been placed with GTA 5 for the One to Watch. Feel free to share your votes for each category in the comments, which the 2012 awards include 16 categories, so happy voting PR readers.

If you’re wondering about the GTA 5 release date then currently nothing official has been announced, but this hasn’t stopped fans speculating and some are hoping the launch date will be revealed in a financial call at the end of this month, and then this could be followed up with the finer details in the magazine next month. The date for Take-Two’s financial results for the 2nd quarter is Oct 30, so mark that date in your calendar.