The hunger for solid Grand Theft Auto 5 news has been building over the last few weeks, which most gamers would take any positive sign towards more GTA V details, trailer 2, or even information about the gameplay. Following the official Gamescom teaser video towards the end of last month, we caught a slight hint that the next GTA could be at the upcoming gaming event, and since then it seems some people are trying to build credibility from this news on their social profiles.

Lying on your LinkedIn past experience — it might be hard for some gamers to believe but people actually put things on their CVs and LinkedIn profile that never really happened, and this is what numerous blogs are claiming about Gerald Bauser and his LinkedIn profile. Only a couple of days ago you could have looked at Bauser’s profile and seen that he looks after programs at Gamescom for a number of games, although this have changed a little since this claim had been made public.

Originally Bauser stated that “Grand Theft Auto V” had been of his responsibilities, but since then he has changed this to just “Rockstar Games“. He hasn’t denied being a “Project Manager for Gamescom“, but his past experience has been altered slightly within the last two days, so this means he is either lying or made a mistake about what he’s allowed to put online. It’s worth noting that a number of sources are claiming they contacted Gamescom and they have “no knowledge” of his involvement with their event. You can see an image of the altered profile experience below. 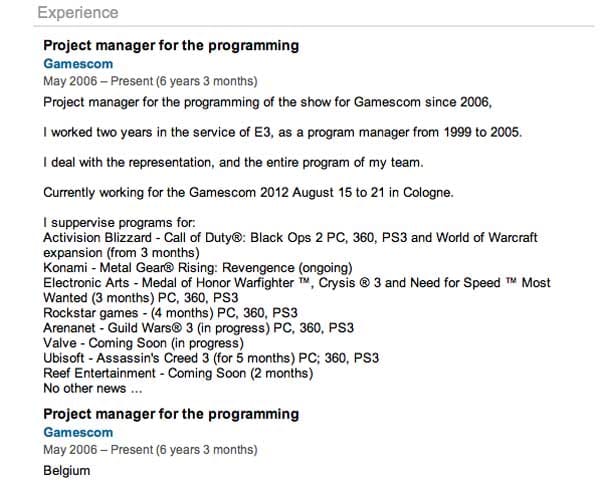 This is the latest in a long line of social profiles giving hints towards a number of games, which include GTA V on many occasions. You might remember just over a month ago we heard about Rockstar North and Rockstar San Diego working together on the GTA V release, and that rumor had come another LinkedIn profile for Jonathan G. The only official answer this rumor received at the time had been one of “we don’t comment” on those types of claims.

While information about GTA V will land on social profiles, especially LinkedIn considering it shows past work experience, it’s worth pointing out that you shouldn’t believe everything put on these profiles. Some people just want to make their CV look much better, although sometimes information found this way can be gold dust and can lead to solid news.

Do you hunt around LinkedIn profiles for employees of publishers and developers? Then hope to find breadcrumbs of information about a future game like GTA 5. On a side note are you planning on buying just GTA 5, or do you have other games in-mind as well like Watch Dogs and Sleeping Dogs?

While news and rumors like this can make an interesting read the bottom-line is we’ll all know when Rockstar’s focus shifts, which will be seen when there’s less Max Payne 3 on their newswire.