We have something that is really going to excite you now. An alleged GTA 5 gameplay video has been posted on YouTube and regardless of the authenticity – we think it sets the standard for the quality of graphics that gamers should expect to see when the game finally comes out.

The video has been on YouTube for several weeks now, so there’s a good chance that you may have already seen the footage. The title of the video is ‘GTA 5 Gameplay’ – rather conspicuous in our opinion and even more dubious when you consider that Rockstar hasn’t even removed the video, with no copyright notice in site.

As of now, there’s almost half a million views, but almost 1000 dislikes as well. The gameplay on offer shows a 4×4 travelling through the desert, with a GTA style map located in the bottom left corner. The graphics look absolutely mindblowing and particularly in the lighting department, with even the littlest details like the shrubs having their own individual shadows on the ground. 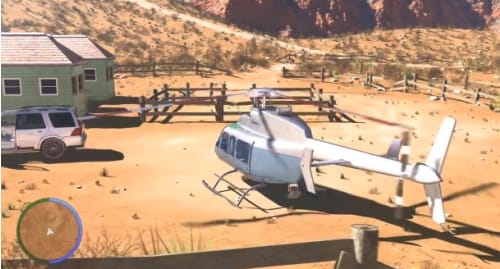 Towards the end of the short clip we see the player exiting the vehicle to switch to a chopper instead and again, the graphics on show here are pretty mouth-watering. Let’s get one thing clear here – there’s obviously a very high chance that the video is fake with the user ‘FranSnk3D’, just making this video from scratch and labeling it as Grand Theft Auto 5 gameplay just to attract attention.

What we want to focus on here though is the quality of graphics shown in the video. The video may be fake, but would you expect the real GTA V game to look as good as this, as a minimum? The visuals are certainly a step up from GTA IV, but is it a little indication of what GTA may end up looking like on next gen hardware?

Take a look at the clip for yourself below and let us know your thoughts on it. It’s probably just another fan video, but do the graphics excite you regardless? We definitely wouldn’t be disappointed if the real game looked like this.