You might be able to take advantage of double RP within Grand Theft Auto V all weekend, but this isn’t what some players wanted and they wonder where the GTA V 1.18 update is? What confused some is the fact we’ve seen Independence Day and Valentine’s Day DLC updates, but nothing for Halloween 2014.

It seemed like the perfect time to release new GTA V DLC with a Halloween event, although the reason this hasn’t happened seems to be a focus on new platforms. You can count on Rockstar working hard on content for PS4, PC, and Xbox One that’s obviously stopping the developers from offering the GTA V 1.18 update and online DLC this weekend. 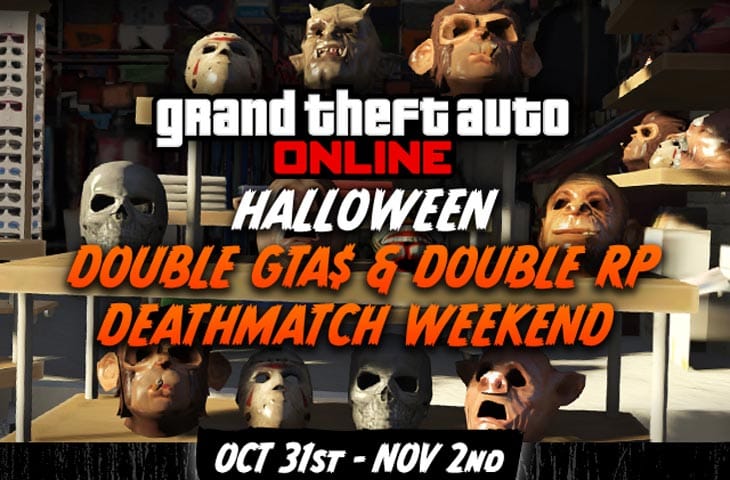 You can see the GTA online double RP and money graphic above that’s being offered over Halloween. You will find many other treats all weekend like special crate drops with the Flash FM T-shirt, and also Firework Launchers along with masks.

Good news for those wanting new GTA V DLC and the 1.18 update – after Rockstar delivered the blog post confirming special create drops and double RP, we’ve seen a comment from Rockstar in regard to future content updates.

Rockstar said “not to worry”, if you desire “more content updates for GTA Online”. They then continued to confirm “exciting stuff in the works for all consoles”, as you can see within the capture of this official comment below.

What we find interesting is the choice of words. This Rockstar official said, “all consoles” and this directly hints at new DLC for current PS3 and Xbox 360, as well as the new platforms launching later this month. Personally, our bet is the GTA V 1.18 update and new content won’t release until the game launches on PS4/PC/Xbox One.

There wasn’t a better time than Halloween, so it’s clear when the new content will come now after the above comment and the fact DLC didn’t arrive with Halloween. Will you stay with GTA V on previous generation consoles, purchase it for new platforms, or leave the game completely?