Earlier on this week we unveiled you to three fantastic new screenshots for the highly anticipated GTA V. Those screenshots gave us an idea on how the new Cheetas will look, but now as promised, Rockstar has given the GTA community more reason to celebrate.

The three screenshots released earlier this week were sub titled ‘Transport’ by Rockstar and showed us cars, jets and bicycles. The developer has now unleashed three new screenshots for you to drool over and it shows us how ‘Leisure’ will also play a big part in Grand Theft Auto 5.

Previous games in the franchise featured all sorts of fun mini-games for the main character to enjoy while not on missions and it looks like GTA V will give you the opportunity to participate in a good old fashioned game of tennis. Rockstar has released a beautiful shot of a private tennis court on the grounds of what looks to be a country villa, with two players in view taking part in a game.

We’re guessing that Rockstar wouldn’t troll us with a picture of a tennis court like that if players couldn’t take part, so assume for now that GTA V will include tennis matches. That’s not all either though – we mentioned above how Rockstar gave us a look at the famous Cheeta sports car and now a new screenshot appears to suggest that Sanchez dirt bike racing is coming back to the game as well. 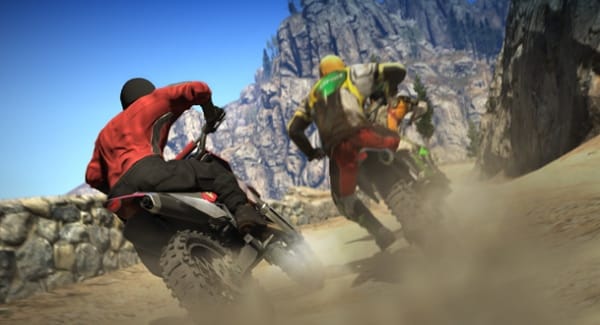 If you’ve played the likes of GTA III, you may remember that you could participate in dirt bike races for prizes and it looks like we’re in for the same treats with GTA V. Last but certainly not least, we may be seeing another first for the GTA V franchise – parachuting.

Rockstar has released an exciting shot of the main player parachuting into a breathtaking river side gorge, and we’re guessing that this aspect may play a key part in some missions when you have to make a quick escape. Better yet, imagine if Rockstar allows you to equip a parachute at any time for use whenever you feel like it – we’re thinking of dirt biking off cliffs into a parachute here? 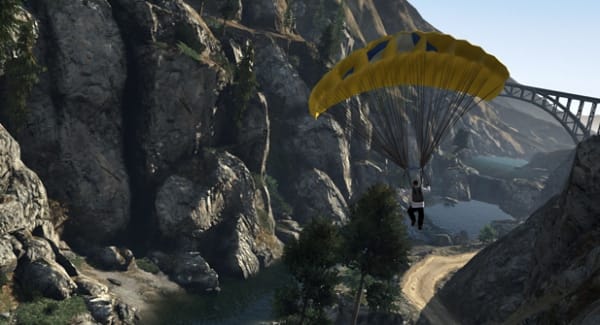 Everyone can agree that Rockstar is taking their time on releasing official information, but you can’t deny that they really know how to make a video game. Just like other GTA titles, it looks like many players are going to put off playing through the main campaign just to relax with activities such as dirt biking, tennis and parachuting.

Has Rockstar outdone themselves with these latest shots? Let us know what activities you plan to do when you get the game.