We have some exciting GTA Online news to bring you now, with regards to the highly anticipated GTA V Christmas DLC update this year. Pressure is on Rockstar to offer an even better Christmas update than last year and now we can bring you the first clues on what it will contain.

We are expecting Rockstar to launch a new GTA V update today since it is Tuesday, but it is highly unlikely to be the Christmas update.

If we were to guess, the GTA V Christmas DLC release date will be Tuesday December 16 or the following week after on December 23, since these are going to be the last two Tuesdays before Christmas Day.

In the meantime, take a look at the above below which we spotted over at the Se7ensins forums. It includes new strings of information that is ‘already’ located inside GTA V game code – which obviously has been unearthed by some naughty individual. 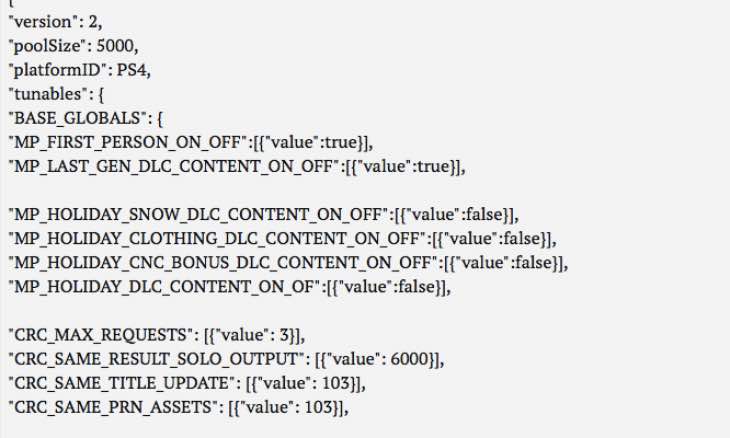 More importantly though, it confirms that GTA V players will once again be playing the game over Christmas, with Rockstar able to toggle a snow setting on and off.

Also, it looks likely that there will be new Christmas-themed clothes to buy and also some ‘Cops and Crooks’ missions to play through at last.

You may remember that we first talked about this mode back in September of 2013, with Cops and Crooks also found inside code at the time – but ultimately never made it into the game.

This mode will allow players to play as the cops and hunt down crooks, which we’re guessing may or may not be attached to the GTA V Heists content. It’s the second time that Rockstar has tagged this mode as being called ‘Cops and Crooks’, so Christmas is when we are likely to see it.

Finally, the last string of information reads “MP_HOLIDAY_DLC_CONTENT_ON_OF”:[{“value”:false}]”, which we believe will end up being new GTA V Christmas DLC weapons to play around with.

As we wait for Rockstar to bring the next GTA Online update, give us your thoughts on the upcoming Christmas DLC update for Grand Theft Auto V.

Do you think that the GTA V Cops and Crooks DLC will arrive at the same time as Heists? It could actually be the next update for the game if a new update doesn’t arrive this week – this being GTA V 1.19 for PS3 and Xbox 360 and GTA V 1.05 for PS4 and Xbox One platforms.

What else would you personally like to see in the GTA V Christmas 2014 update?