It has been a long time coming, but Rockstar has finally given their fans some official GTA V news which isn’t related to April Fools Day. That has now been and gone, but Rockstar has released the official Grand Theft Auto V box art, letting you see some of the main characters that will be featured as the main artwork for the game.

As expected, it is a colorful masterpiece. GTA box arts are always something to look forward to upon release and the artwork for the latest game is no different. We get another look at the three main characters in the game, Trevor, Michael and Franklin – who all feature on the front cover of the game.

However, there are also some surprising additions as well, such as slots for a nasty looking rottweiler called Chop, the pretty blonde with the Rockstar-esque iPhone and two transport methods as well with a jet-ski and attack helicopter. Reaction to the cover art has been very positive as you can imagine, with over 10,000 retweets so far on Rockstar’s original Twitter post.

We heard how some people would have liked to see a completely different design approach to the GTA box art, but it looks like Rockstar has found their formula and see no reason for a drastic change for the near future. It would be nice if the box art was somehow customizable to everyone, but we’re definitely happy with the artwork above for the final game. 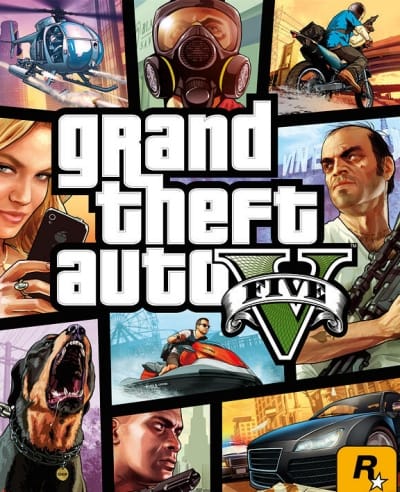 As far as we’re aware, this will be the definitive box art that will be shipping with all copies of the game, although Rockstar has yet to disclose information on the various limited edition versions of the game that will obviously become available closer to release.

Take a look at the lovely box art above for yourself and let us know your thoughts on it. Are you satisfied with it or not?