Are you still playing GTA V on a regular basis, or are you taking a break from the game until Rockstar finally delivers on GTA V Heists and the first meaningful GTA V DLC expansion?

We told you about the latest Heists rumors here, but now we move on to something potentially more exciting. By now, most of you will have discovered that there is more to Los Santos than meets the eye especially when it comes to alien and extra terrestrial activities.

GTA V UFO locations are hidden in the game and many fans still believe that this part of the game is unanswered. We spoke about the idea of Rockstar turning away from the zombie DLC route in favor of an alien invasion DLC instead, but would you still like to see this happen?

We see feedback all the time on how a GTA V Undead Nightmare DLC needs to happen, but we would also love Rockstar to explore this alien side of the game further and we have a feeling that a lot of you want to see it as well.

Starting with what we do know, it’s now been confirmed that Take-Two has trademarked something known as ‘Hangar 13’. You can see evidence of this below thanks to AllGamesBeta – but obviously there is no guarantee yet that this is either GTA V related, or indeed alien related. 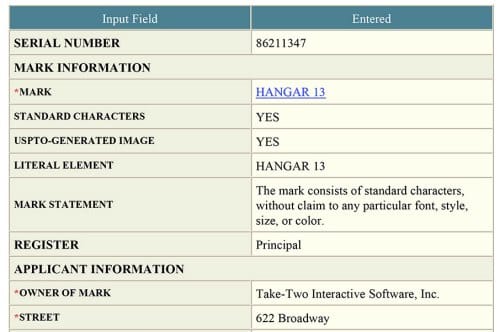 We know what you’re thinking as well, isn’t Hangar 18, not Hangar 13 meant to be the subject of aliens instead? Presuming this theory is true though, there’s nothing stopping Rockstar from doing their own thing and making Hangar 13 the first paid GTA V DLC which includes a full blown alien and UFO mystery to explore.

Obviously it’s pure speculation at this point, but there’s no denying the fact that the truth is still out there in Los Santos and Rockstar has purposefully left the UFO side of the game unfinished.

Read all about the UFO material in the game here as well as the confirmed sightings and let us know if you would be willing to pay for any GTA V alien DLC, should it happen.

Remember that this Hangar 13 trademark could still turn out to be something completely different, but let’s get excited for the fact that it may be alien related.

Would you like to see a GTA V alien expansion or not?