We told you earlier that one of the big surprises with the GTA V Independence Day update was the addition of the monster truck called The Liberator. However, it’s not the only special item to land with the update as Rockstar has now unleashed the GTA V Firework Launcher in the game as well.

This is a special weapon that will allow players to celebrate GTA V July 4th in style with your very own personal fireworks display. Simply aim the launcher into the air and watch as the fireworks launcher recreates the typical sound effects that you will probably hear in your street on July 4.

For those that are studying or at work and cannot play the new GTA V update, we can bring you some fantastic gameplay showing all three new main items in the Independence Day patch – these being the monster truck, musket and fireworks launcher. 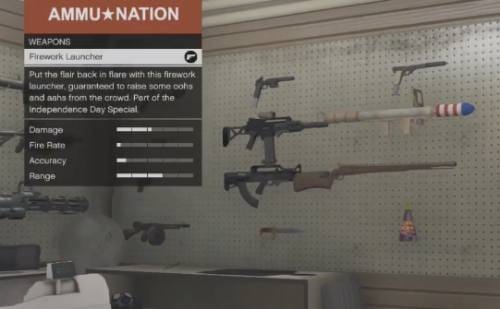 You can always count on Rockstar to provide gamers with some fresh fun. We see that everyone is complaining about the lack of Heists, but this is yet another free update that nobody can be angry about.

The firework launcher is great fun so let us know if you have been using it since the update went live and what you think about it so far. Is it your new favorite weapon in the game?