We have just seen the Grand Theft Auto V 1.20 update go live on PS4, which comes along with patch notes for the GTA V 1.06 PS4 update as well. This is within the same hour we had been looking at when Heists would arrive in early 2015, so seeing the patch took us by surprise.

Right now, we don’t know exactly what’s included in this patch, but we have published the GTA V 1.06 update notes below that can be seen from the icon download history.

As you can see below, the PS4 update includes “additional fixes for GTA Online to improve stability”. It’s not clear if this is a vital bug fix on the traditional Tuesday for downloads, or if this patch was needed to deliver the snow to GTA Online, but we will find out more in the coming hour. 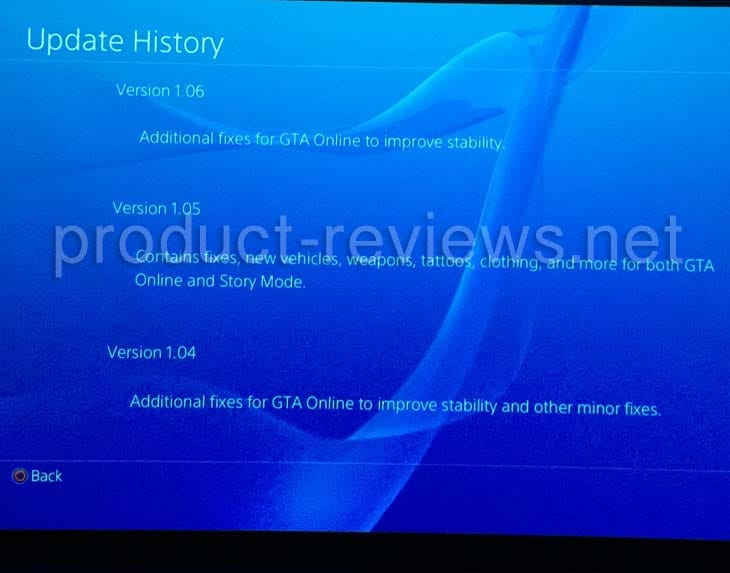 Has the GTA V 1.20 version on PS3 and 1.06 update version on PS4 gone live for you yet? Also, if you are running the game on Xbox please leave a comment with the version number below.

This download only went live within the last 15 minutes and earlier than normal Tuesday updates, so Rockstar Games is yet to post news to their newswire. Product Reviews normally breaks the news before the official blog, so again leave comments with anything you notice after installing.

The file size on PS4 is well over 1GB once again, so this is a pretty sizeable install that you might want to start soon. It’s also strange to see two updates so close together, unless again this is for the snowball fights rather than just bug fixes.