The Grand Theft Auto V 1.16 update was expected by the majority earlier this week, but as the normal release time passed it became evident Rockstar weren’t playing ball. It would now be a shocking outcome for this Tuesday to arrive without the GTA V 1.16 update, and of course some new online content including fresh weapons, cars, and more.

If no new content arrives next week on the traditional download day, then it would be 42 days since the 1.15 update and Independence Day DLC. This fact alone has some people believing it’s almost impossible for Rockstar not to release an update, or they’ll be certain to receive a backlash from players wanting either new downloadable content or bug fixes.

One gamer had this to say after last Tuesday, “I don’t see the release notes on Rockstar’s Newswire way past the expected time, and we’re left with a plague of invulnerability glitchers everywhere that ruin the experience for most of us”. Another added, “enough is enough Rockstar, please release the GTA 5 1.16 update on August 12th, or I will be leaving playing online until these game-breaking glitches are fixed”. 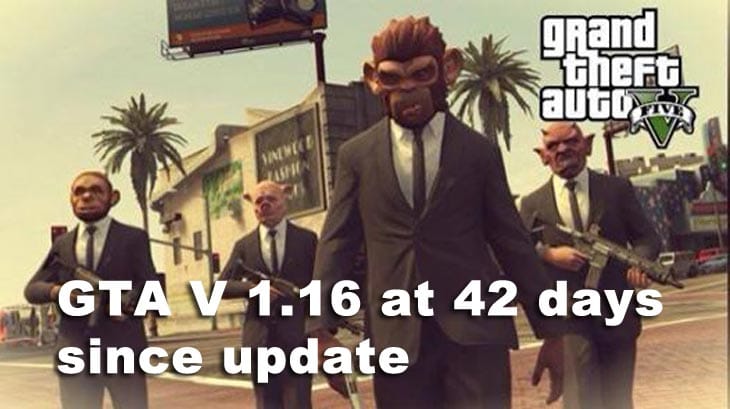 Do you feel that the GTA V 1.16 update has to release next week and if it doesn’t, is it a big deal to you? There’s hope that a longer wait between GTA Online updates might mean something big is coming, now whether that’s Heists or some major DLC is yet to be seen. If this happens, then you can be sure it will restore some gamers faith in Rockstar to deliver.