Rockstar may have turned off snow in GTA Online, following on from the fantastic Festive update for the game, but we have seen that some naughty individuals are finding ways to make snow a permanent feature in GTA V.

We all love snow in Los Santos and this small feature alone helped boost up server numbers of the Holiday break, not to mention keeping players coming back to the game purely to engage in some good old-fashioned snowball fights.

Now we have spotted that one member of the GTA Online community is offering a way back to snow as well as other features by way of a GTA Online DNS code after the 1.20 update. 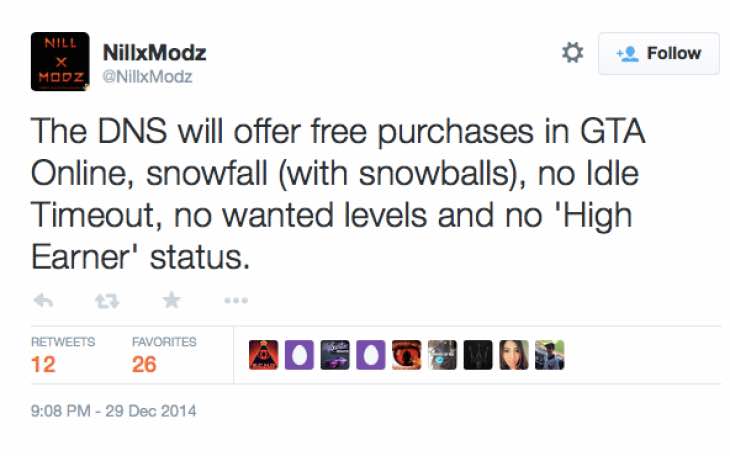 While we don’t condone anything that is against Rockstar’s own rules and regulations for the game, we can even see that the person hosting the servers NillxModz is even accepting donations to be ‘prioritized’ into receiving a invite.

You may remember that this is the same individual which previously managed to leak upcoming details of the GTA V Festive update weeks in advance. Now he is back with his latest efforts for those that want to enjoy GTA Online on the dark side.

Aside from permanent snow in the game, this DNS server for GTA Online also promises other perks such as no wanted levels, no bad sport status and perhaps the best of all – ‘free in-game purchases’, which we assume to include any vehicle in the game.

It obviously sounds tempting, but if you do decide that you want to join these kinds of servers, you’ll be risking the wrath of Rockstar in the process. Let us know what you think about this and the fact that you can now ‘pay’ real money to get a private invite into this new activity.