Earlier on we reported on the rumors that the GTA 5 Valentine’s Day DLC update had gone live early for some, but now we can definitely confirm that the GTA 5 ‘Be My Valentine’ update is live for PS4, Xbox One and PC.

We know this as Rockstar has now posted the GTA Online 1.32 patch notes for PS4, Xbox One and PC and we are happy to include them here in their entirety.

As previously leaked, this new GTA V update on February 10, 2016 adds the Albany Roosevelt Valor to Legendary Motorsports and we can confirm that the price has been set at $982,000. 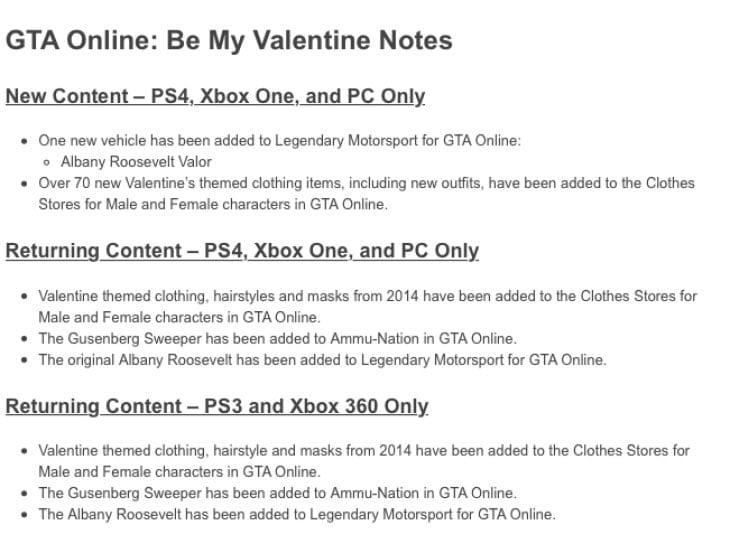 Also new is 70 pieces of Valentines clothes for you to enjoy, while a further treat from Rockstar lies waiting for you in Ammu-Nation with the return of the Gusenberg Sweeper.

You may also be pleased to see that the original Albany Roosevelt is available too, allowing you to do some nice comparisons with the new remodelled version – stay tuned for a speed test on that soon!

Rockstar caught us by surprise by flicking the switch on this update as we expected it on a Thursday – very unusual for new content to go live on a Wednesday, but perhaps warranted this time given the content was already in the game files as of 1.16 / 1.32.

What changes do you spot in GTA Online 1.32 which are not mentioned above? Please list any hidden features below to discuss with other players.