It has become apparent that Rockstar has again been forced into action over new GTA Online 1.20 money glitches. The developer has now confirmed over on their support pages that GTA Online betting has been removed from the game until further notice.

Betting on GTA Online races is unavailable at the moment, which is disappointing as it was a great way to pass time and earn some extra cash in a legitimate way.

As usual though, some players have found a glitch within this area of the game and have been using it for weeks to get unlimited money in GTA Online – now Rockstar has found out about it.

As a result, the betting aspect has been removed from the game ‘temporarily’ and Rockstar states that it will return in a new Title update. It’s not confirmed yet however, whether this will be the upcoming GTA V 1.21 update on PS3 and Xbox 360, or the GTA V 1.07 update for PS4 and Xbox One. 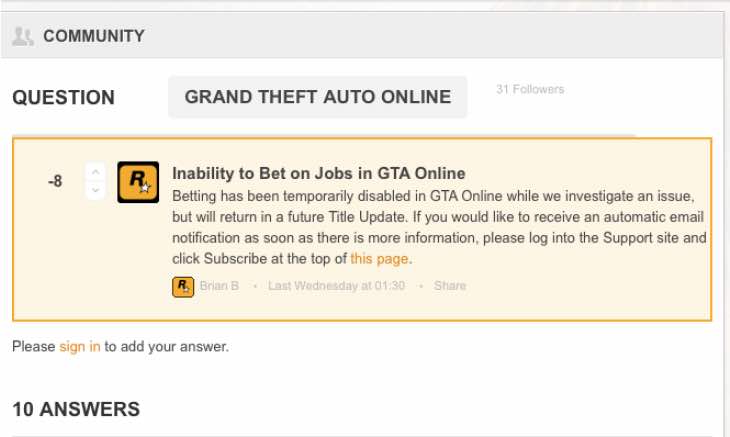 There appears to be dividing opinion on the ban once again, from the community. Some are saying that it ‘wasn’t really a glitch’, while others are praising Rockstar for managing to stop this exploit from creating an unfair environment in GTA Online.

We can also see that many are getting tired of the ‘YouTube spammers’ who are constantly uploading videos on the game each day, most of which are advertising GTA Online hacks and cheats – thus making this latest money glitch in GTA Online more accessible.

What are your thoughts on the ban – are you upset about it? We’ll let you know when it is back in the game.