Earlier on we discussed the idea of destruction elements appearing in the upcoming and highly anticipated Grand Theft Auto 5 game. Moving swifly on from that, we now want to talk about another feature which is high on your wish list of new inclusions for the game.

It has proved to be a success for the likes of Treyarch’s Call of Duty games and even Rockstar’s own Red Dead Redemption game, but how would you feel if some sort of zombie mode was implemented into Grand Theft Auto?

There are two ways in which Rockstar could handle this without the core element of the game being unaffected. The first would be to include zombies as some sort of secret missions which have to be unlocked at the end of the game. For example, Rockstar could create a series of missions where the humans you would normally have to kill become zombies, making them harder to kill and with each mission becoming more difficult – just like the way zombies works in Call of Duty Black Ops.

The other route for zombies in GTA 5 that we think could be a possibility, would just to have zombies as an unlockable cheat code that you can get by completing the game on a hard difficulty setting, or another hard to achieve requirement in the standard game. Enabling the zombie code could turn all pedestrians against you, with Rockstar implementing GTA style ‘Rampage’ missions with difficulty increasing round after round. You’ll be able to take zombies out with a full plethora of weapons, and it would be even better if Rockstar could somehow enable play with a friend offline or online.

It may seem pretty farfetched, but if Rockstar are willing to do it with Red Dead Redemption, we can definitely see it happening with Grand Theft Auto 5. Let us know your thoughts on this – would you like to see a zombie mode in GTA 5 or not? 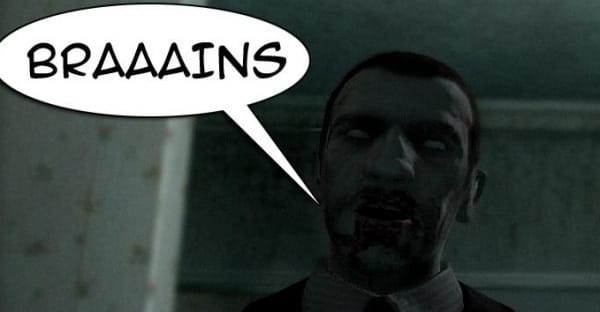