We are getting closer to the next GTA Online update for GTA 5, with speculation brewing that it is going to be a significant update which will add the GTA 5 Lowriders Part 2 DLC content to the game.

This content has been rumored for some time and it was initially thought that it could be released in conjunction with the GTA 5 Valentine’s Day content for this year.

That obviously didn’t happen though and now we are expecting the content to drop for the first big GTA 5 update in March 2016.

Rockstar hasn’t announced anything officially yet, but leaked information dating back a few months suggests that the bulk of the content may have already been revealed. 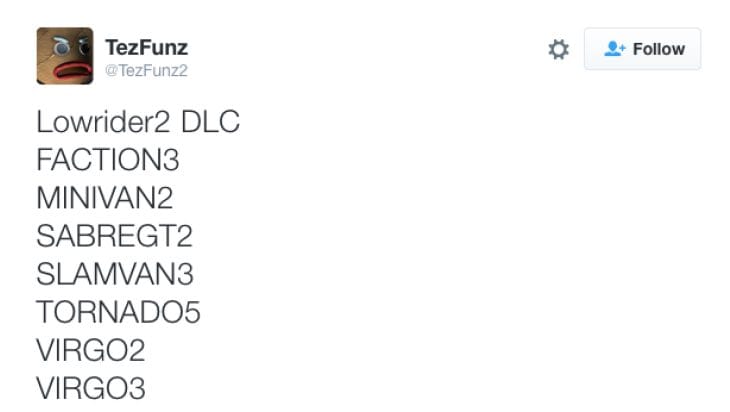 Presuming information from regular GTA 5 leaker FunMW2 is correct, then above could be the list of new cars from the GTA V Lowriders 2 DLC.

They include the likes of the Faction 3, Mini Van 2, SabreGT2, Tornado 5 and Virgo 3 among other cars which you can see above.

There’s also going to new weapons with the Lowriders Part 2 DLC and if leaked information is again correct these should be the Double Barrel shotgun and also a Combat Rifle.

Remember that none of this is confirmed yet, but at least you have a heads-up on what could be coming very soon. Is this the GTA 5 1.17 update all packaged into one?

Let us know what you want to see personally from the Lowriders Part 2 update for GTA 5 in our comments section.