Now it’s known that GTA 5 will not release this year we can only think about what we want in the next installment, and this is just what thousands of gamers are doing on a daily basis. Some of the ideas being shared are obvious, while others are extremely inventive.

Grand Theft Auto is much more than a car game but better car physics is needed to help with improved drifting, and a better range of cars would also be a welcomed improvement. We’ve already heard about the potential of the PS4 and Xbox 720, which are expected within the next few years, and some claims have pointed to pedestrian having their own personality in games. While we don’t expect this level of detail in the PS3 or Xbox 360 version of GTA 5, it would be nice to have more pedestrian actions like getting drunk, using cell phones, etc.

Two of the most needed features for GTA 5, in our opinion, are destruction and cheats. First up is cheats, having played GTA 4 for hundreds of hours it’s obvious that cheats add another layer to GTA. Entering a code into the cell phone and gaining access to all the weapons, or a helicopter let’s the player take on another world of flying around and becoming a sniper on top of high buildings that took a helicopter to reach. The next version of Grand Theft Auto needs cheats again, but also with some more innovative items that could include diggers, JCBs, remote control planes with guns, parachutes, gunships etc. Feel free to share your ideas on better cheats for GTA 5 to add a totally new gaming experience.

Pair the above with a destructible environment in GTA 5 and you’ve really got something special. Imagine taking out buildings with diggers, piece-by-piece, and blowing parts of buildings away with rocket launches or a gunship/helicopter. Give us a lot more buildings to enter with small things to do in them like robbing, and maybe add some C4, then you could even blow a building up and bring the whole thing down. Bullet holes need to appear on buildings with a bigger range of guns to include fun things like Tasers. It’s the little things as well that count for making everything feel more realistic, like making better recycle bins with wheels and waste inside, or certain areas need to be more crowded with people like airports. I’m sure you can think of a few “little things” that would improve the game massively.

This may seem a bit much to some gamers, but GTA is all about freedom to do almost anything, and the power of the PS3/Xbox 360 is more than capable to bring all of this to the table via cheats and destruction.

Other than a new set of missions, adding destruction will make everything feel more realistic and add that cool factor. If this was added I would gladly pay a lot more for the game. Let us know in the comments below, the cheats you would love and if GTA needs destruction in your opinion. 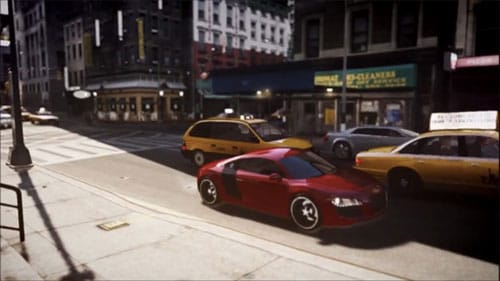