We know that the highly anticipated GTA 5 Import and Export DLC release date is coming very soon. Before that though, we can give you a preview of what else is coming in the update thanks to some early leaks.

You should know by now that there is a whole community of users who scour the code of GTA to find any juicy information on a patch prior to release.

Everyone wants to know what is coming in the GTA 5 Christmas DLC for 2016 and now we can give you some extra clues that Rockstar didn’t mention yet in their Newswire feed. 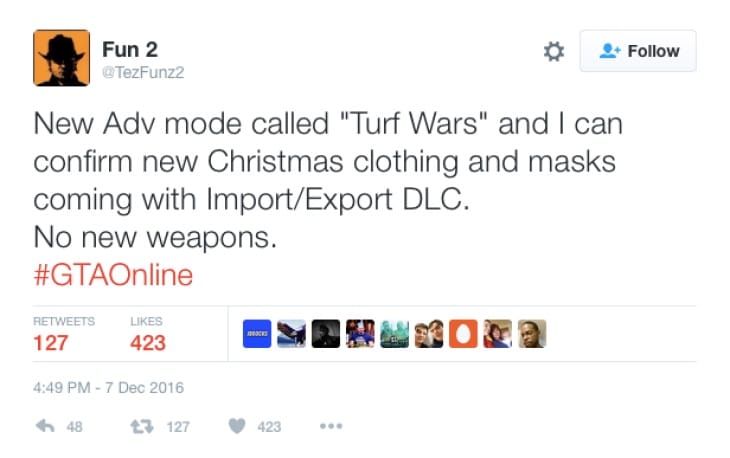 TehFunz2 is a renowned leaker for GTA Online and according to his information, the Import Export DLC is going to be coming with a new Adversary mode called Turf Wars.

On top of this, there will be new Christmas clothes in the same update and also some new Christmas masks as well which we know you all love to wear throughout December.

Unfortunately, there’s also a confirmation that there will be no new GTA Online Christmas weapons according to the leak, so you will have to make do with 25 new vehicles instead.

We’ll let you know about those vehicles in more detail soon, but are you excited about the new Adversary mode attached to the Import Export DLC?

Let us know what you think as the rumored release is December 13 – next Tuesday!