We may have the first information to share on the next GTA 5 update, which should be the GTA V 1.18 patch or the 1.34 Online version specifically.

While we are probably some way off release at the moment, we have spotted that again it looks like details on the next GTA 5 content may already be hidden away inside the game code.

Resident GTA 5 informant Yan2295 has revealed recently on the GTAForums that Rockstar could be bringing three new cars to GTA 5 as part of the continuation of the popular Lowriders theme.

If the information revealed is true, then players will soon be able to customize the Tornado Custom, the Minivan Custom and the Sabre Turbo Custom. 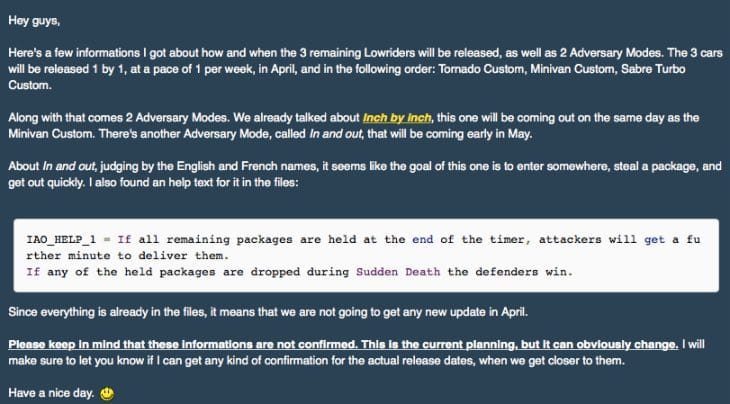 On top of this, we hear that two new GTA 5 Adversary modes are planned for April as well, these are Inch by Inch and In and Out.

The interesting thing is that Rockstar may decide to release one new car per week in April according to the code.

Also it may suggest that since these cars are already in the code, it may mean that they will arrive via a tunables update rather than require an update to GTA 5 1.18 and 1.34 – meaning that we get three new cars next month but stay on 1.17 / 1.33.

This isn’t confirmed though and as always it’s just speculation until we get the details from Rockstar.

Give us your reaction to another 3 new cars in GTA 5 with possibly Lowriders Part 3 and the two new adversary modes.