The FIFA 17 January transfer window is coming soon and also the highly anticipated Winter Upgrades. That means all eyes are on real life transfer rumors and this week the main talking point is Antoine Griezmann to Manchester United.

Atletico Madrid’s star striker has made some very revealing quotes this week, in which he was reported to have said that he would love to play at club level with Paul Pogba – his International teammate for France of course.

If it does happen, FIFA 17 players are going to get very excited when drooling over the prospect of Griezmann having PL chemistry links.

Take a look at how his card would look like after a transfer to Man Utd: 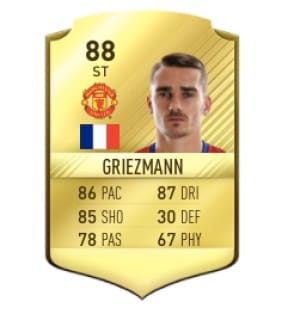 We doubt that this would happen in January, but stranger things have happened in football. Would Griezmann be the missing ingredient for Manchester United, or would it be a bad move in terms of Rashford having to find a new club?

If you are excited about this potential transfer, give us the names of other players who you want to see make January or Summer transfers.

Enjoy the preview of Griezmann in a Man Utd shirt below on FIFA 17.