When it comes to tough screens in some of our devices, such as smartphones, tablet PCs and TVs, then Corning’s Gorilla glass is the product that you need. However, there is now a rival about to hit the market, which is called Dragontrail glass. Asahi, the company behind the new technology has said that it has taken two years to develop is already in use in a few products already on the market.

Both companies are very secretive over who they supply their glass too, but we already know that Gorilla glass is used for the Samsung Galaxy Tab and S, and there has been speculation that it is used in the iPhone 4, but we have yet to get confirmation of this. According to Yahoo News both types of glass are six times as strong as chemically treated soda lime glass. 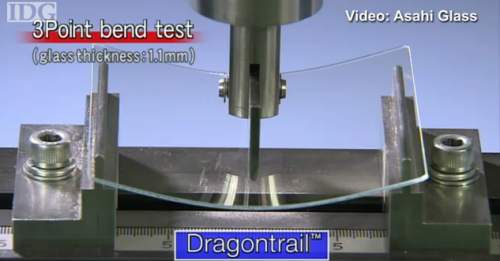 We have embedded two videos for you below; both feature a demonstration of how tough these two products are. My friend currently has the Galaxy Tab and the Galaxy, but for some reason he is not willing to let me try and scratch the screen — do not know why?

Juro Osawa from WSJ reports that Asahi Glass Co. hopes to gain a 30 percent market share in glass for smartphones, TV’s tablet PCs etc, and believes that they can make 30 billion yen ($365.6 million) from the sale of their product. Which of the two do you believe is stronger?