We love it when a company takes their already good product and turns it into a great product and that is exactly what GoPro have done their new GoPro HERO3. This has not been simply a matter of repackaging, adding a few sleek curves and a new color scheme, the GoPro has had a serious makeover both inside and out. GoPro have really given their new 4K camera some thought and made some inspired changes and added some fantastic additional features.

For any PR followers who are not familiar with the GoPro they are wearable, shockproof and waterproof cameras and have been widely used in adrenalin sport circles since 2004. In the last couple of years they have been adopted by most major TV stations and used to capture HD images for broadcasting. The cameras can be attached to the body with various straps, harnesses or can be helmet mounted or attached to vehicles, bikes and boards with quality suction or sticky pads. 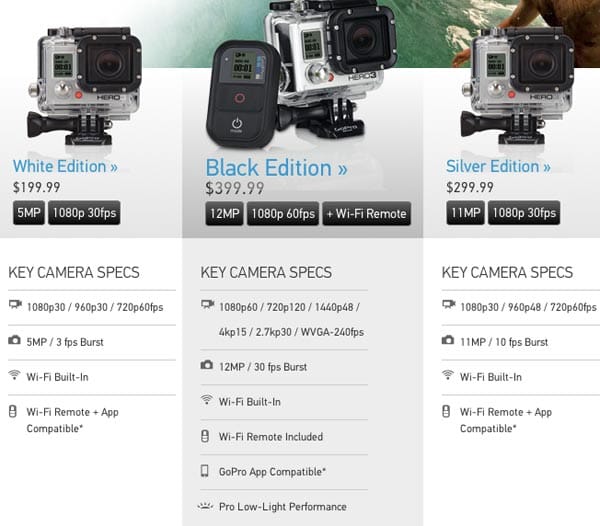 The first and most obvious change is the fact that the GoPro 3 is 30% smaller and 25% lighter than previous models, now weighing in at just 2.6 ounces; impressive considering the previous incarnation was barely noticeable when worn. A new reduced-distortion aspherical lens means recorded images are so much sharper and suffer much less distortion and this combined with a newly designed flat lens waterproof housing means a much better image is captured above and below water.

We at PR, feel the biggest addition has to be the built in Wi-Fi and the optional Wi-Fi remote. With built in Wi-Fi the HERO3 can also be controlled with iOS Smartphones and Tablets running the GoPro app. This allows full camera control and live preview on your App enabled product.

We have owned the HER02 for a while and the quality of video and pictures taken have been outstanding. Unfortunately we have noticed a couple of issues with the HERO2 and are really hoping that GoPro have addressed these with the new Editions. We found the menu for controlling the camera sometimes confusing and it took a long time to learn the scrolling route to alter various settings and to change functions. The biggest problem for us however is the occasional fogging of the camera when sometimes used in very cold water or the camera was worn against the body for long periods of time, GoPro do sell anti fog inserts to combat this, but loosing footage of a recent Maldivian surf trip was a painful lesson learnt.

With prices starting at $199.99 for the White Edition through to $399.99 for the Black Edition GoPro have created a tiny, robust and innovative camera that punches well above its weight. The GoPro official video below is well worth a watch for jaw dropping quality and action.

The GoPro HERO3 is on pre-order now and will be available for shipping from November 15, and we don’t expect this release date to change. Let us know your thoughts on the new Go Pro HERO3 and will anyone here be rushing out to place an order and let us know of any other improvements you wish they had made?