Since Google+ or Plus as it is known was launched on June 28, 2011, it has proven very popular. The first few weeks were relentless in the amount of people signing up to the new social network, after being invited by others. In just over one month there are now over 25 million users, which was a little short of the expected 30 million. You do not have to be an expert to know that Google+ is targeting Facebook, but how does it really compare?

We have located an INFOGRAPHIC (see below) that looks at more details to do with Google+ and marks its features out of ten when compared to Facebook. Trying to understand everything about the new social network is tough, and I am still getting to grips with mine (see my profile). So lets take a little look at this INFOGRAPHIC to see what the two are up against.

The first comparison is between Facebook Friends and Google+ Circles. We already know so much about the former, and you can learn more about the latter in an insightful article wrote by Jamie Pert. Friends scores 8 out of 10 with Circles getting a big fat ten. Next up is for video chatting. We have Facebook Video Calling and Hangouts; Facebook loses this one as well, with 6 out of 10 compared to 10 out of 10. 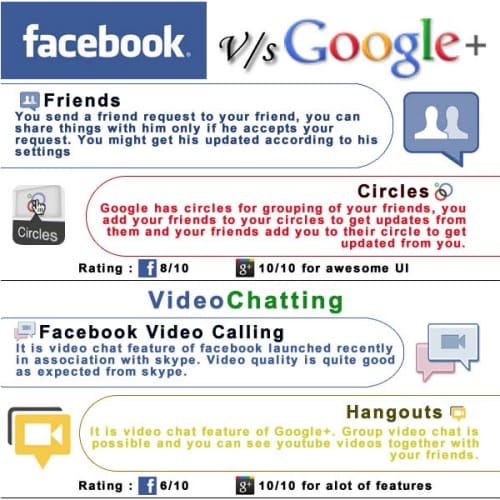 Thanks to The Tech Addicts.

The final rating is for Group Chat, in one corner you have Facebook Group Chat and in the other GTalk; both score ten. You can clearly see that Google+ has Facebook beat in so many areas, but it is not perfect. There are still a number of issues, but we have to remember that the service is still in its infancy. Improvements will come; we just have to be a little patient.

The rest of the INFOGRAPHIC looks at some of the other main features of each service, such as Search Visibility, Chat Privacy, Mobility, Apps and Games, Notification System and much more. Some of these features are still missing on Google+, but this was to be expected. How could Google offer all these features from the start, as this could have been another Buzz — which would have been a huge waste of time and money?

Now that Google knows that they have finally come up with a platform that can take on Facebook, we now expect this giant to go all out and show us what they are capable of.