Following on from the major news that Google has now added a call feature to their Gmail web service, it has now been confirmed that the company plans to place UK-style phone booths at some locations in the US.

As reported from Engadget, anyone with a Gmail account will be able to make calls to other users, straight from your laptop or computer. With the upcoming placement of special booths, you’ll even be able to make the experience more fun by phoning friends or family from a Google Voice booth.

You won’t see these booths everywhere though. Google states that they will start appearing in airports and college campuses. Will the public just see this as an unnecessary gimmick, or will it really attract them to the wonderful world of Google Call?

If you’re in the US or Canada, you should particularly pay attention, since you’ll be able to make free landline calls in these booths, using pre-paid credits from Google Checkout.

Take a look at the booth below and let us know what you think of it. Smart idea or not? 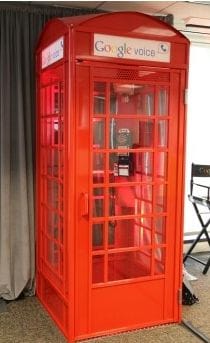