What a week it’s been for Google and the early starters on their new social network, with thousands of people looking for a Google Plus invite, and those already onboard are enjoying the speedy growth with complete strangers putting them in circles. We’ve seen a number of people sign up to Google+ and then not visit their profile for a few days, then they return to find hundreds of people putting them in circles. This is due to sending invites to friends and family, and also the way Google has designed the service that is the biggest competition to Facebook yet.

However, there is always going to be inevitable problems with Google+ and this has been highlighted by the way you can join. During the trial of Google+, we’ve seen scammers trying to take advantage of the invite only system. Thousands of people are looking for Google+ invites and are at risk of stumbling across scammers, especially on Facebook. We first talked about this in an article one week ago, which you can read here.

Facebook has around 750 million users and as such will be a target for scams; one of the most recent Facebook scams involved a leaked video of Casey Anthony confessing to a lawyer. Most of you will already know about this scam that has been spreading on Facebook. If not, you can read about it in this article.

Following on from previous attempts to scam users into thinking they have been invited into the new Google+ social service, we have a new word of caution for those who are desperately on the prowl for invites. It has been discovered that a dodgy Facebook application is now doing the rounds on the social networking website, and it appears to offer users a free ticket into Google’s new Plus service, bypassing the current invite system that Google are using at the moment.

Appropriately titled ‘Google Plus – Direct Access’, it attempts to con users into giving their personal details out in the form of a sign up page, asking for your real name, username, a list of friends, and even a profile picture. We’re guessing that a lot of unsuspecting Facebook users have already fallen for the trap, as simply clicking ‘Allow’ on the application will result in the app gaining access to your current Facebook account, allowing the scammers to obtain access to your email address, your Facebook wall, having the ability to send messages to your friend’s walls and even access your personal information if you go offline on Facebook.

Check out a sample image from the Google+ invite scam on Facebook – you can see it looks pretty genuine, but there are a few typos located on the Facebook page itself, so this should help you realise that this is all one big con. If you have already fallen for this trap, we advise you to uninstall the app immediately from your Facebook page and change your password immediately. 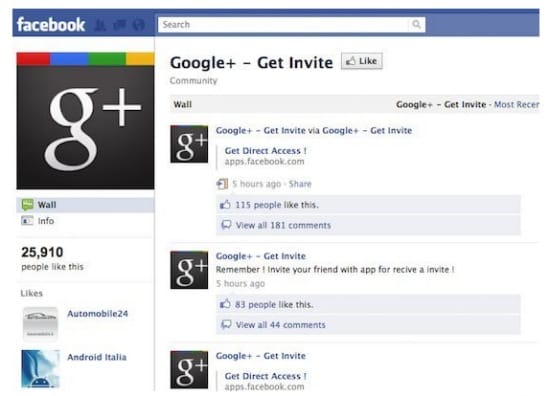 The worrying thing from our perspective, is the amount of users getting duped by this rogue application already. The page has racked up thousands of likes already, and we can see that users are carelessly leaving their email addresses in the main wall for everyone to see. Hopefully after our caution, word will start to spread and users can enter Google+ properly via an invite without exposing all of their personal details to scammers.

Have you been caught out by this Facebook App? If you are yet to try out Google+ and would like an invite, send me an email to alan@product-reviews.net and i’ll be happy to help you out. In return, you can help us by sharing PR on Google+ by clicking the +1 button to the right of this article.