Up until now it was only Android-based smartphone owners who had access to the Google Places app, but that appears to have changed now as Google has just released the app for iOS devices. The app helps user discover brand new places, by using GPS to detect your surroundings and the closest locations.

According to an article over at appscout.com by Jennifer Bergen, the Google Places app uses Hotpot, which is the company’s new personalized recommendation engine. It also adds an element of Yelp by allowing users to rate their experience, and enables them to share places with their friends. 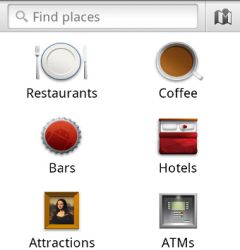 The Google Places application features nine icon slots, which you can customize to your favorite or most used places such as gas stations, bars, restaurants and even ATMs. When users click on a specific category, a list of nearby places — with Place Page info included — will appear, along with ratings and reviews.

As mentioned over on the itunes.apple.com website, the Google Places app is compatible with iPhone, iPod Touch and iPad, and requires iOS 3.0 or later. As Michael Muchmore at pcmag.com reports, rating a place on the app is quite simple. All you have to do is press a happy face or a frown and give it a star rating out of five.