Nowadays Google is more than just a search engine, with their mobile OS Android being the most popular smartphone software on the market today, and even having their own social network. Even one of the most popular web browsers available today belongs to the company, which is their speedy Chrome and they have their own Chrome OS laptops called Chromebooks.

In a recent article at Computerworld, it was revealed that the Chrome browser is actually the third most popular behind Firefox and Internet Explorer, and is on the verge of overtaking Firefox in terms of popularity very soon. Current statistics show that Microsoft’s IE is the most popular by quite a significant amount, having a global average user share of 41.7%, while Firefox currently has a 26.8% share and Chrome is gaining with 23.6%.

Since the start of 2011 Google has seen their browser Chrome’s popularity increase by eight percent representing a 50% increase overall. As a commemoration of their popularity, if you like, the internet giants have opened their first physical Chrome tore called Chromezone. The store is located in Tottenham Court Road in London inside a Currys and PC World store.

The Chromezone store is Google’s experimental new way of selling its range of Chromebook laptops. Until now these laptops, which run on Google’s own OS, were only available to buy online, but their new strategy will allow customers the opportunity to actually see the devices before they buy them. According to The Telegraph, the launch of this store was ‘low-key’ when compared to the opening of Apple’s first London store back in 2004, which was extremely hyped.

What do you think of Google’s Chrome brand? Will you be visiting the store? 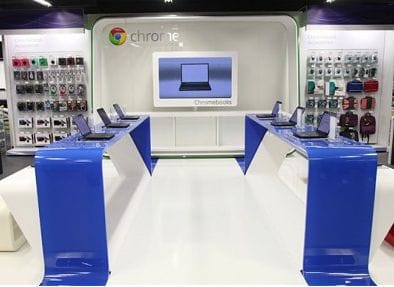