The journey towards Google’s Nexus 7 launch has been a battle and around a week ago we heard that Nokia claimed the tablet is infringing on certain patents, which worried some people that had already pre-ordered and are looking forward to getting hands-on with both the Nexus 7 and Android 4.1 Jelly Bean. Nokia had reportedly told The Inquirer that the Nexus 7 is “not licensed” under their list of patents and Google only needs to “approach” them for a license.

With Nokia’s relaxed approach to licensing their patent portfolio it seems that any problems will not change the Nexus 7 release date, which is believed to be July 19 in the UK, according to a shipping date for UK retailer Curry’s. These dates can change and this might be a placeholder Curry’s is using, which they cover themselves by stating it is “expected” on this date, although this contradicts early rumors of a release towards the end of this month. We had a look on the official Google website for Nexus 7 and on their pre-order page it shows the device will ship in 2-3 weeks.

Recently we looked at the $199 price point for Google’s Nexus 7, which is directed at Amazon’s Kindle Fire, especially considering they’re both at the same price point. While this might make the iPad look less desirable to some people you got to remember that there is a big size difference, so if you want something much bigger than your smartphone then the 7-inch display, found on the Kindle Fire and Nexus 7, might not cut it. Some full-page documents and magazines will be much harder to read on a 7-inch display, which are perfect for the iPads 10-inch screen. 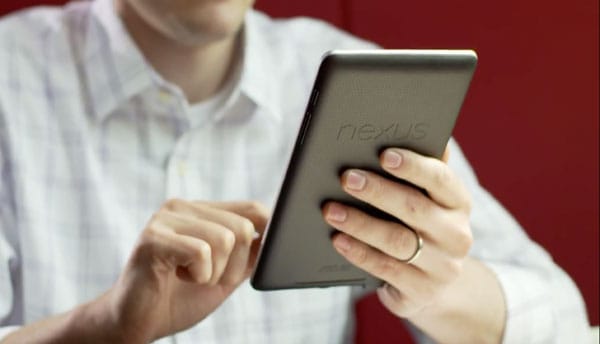 The real selling point for Nexus 7 is the stock Android that delivers a greater selection of software, and also being the first device to run Jelly Bean makes for a tempting purchase. You can see the official Google introduction video below this article, which gives you a taste of what to expect from Nexus 7 and Android 4.1.

Samsung has also won a partial victory with their battle against Apple, which saw a U.S. appeals court lift the ban on Galaxy Nexus sales, although the Galaxy 10.1 tablet will still be blocked for a little while longer.

Do you prefer a 7-inch tablet display on a device like the Google Nexus 7, or is that size too close to smartphones?