We have some great news for regular users of Twitter and Google Maps lovers out there, as Twitter has just announced the addition of a cool Google Maps plugin, which can be used whenever you tweet someone else.

As reported from VentureBeat, Twitter will now let you see where people are located in the world when they tweet you, as long as the user turns on this feature in settings.

This was previewed by Twitter recently, but now it is available for everyone to try out today. Whenever you see a little blue icon beside tweets on your profile, simply hover over it, and a Google Maps plugin will pop up, showing you exactly where the Tweet was published from.

Quite a cool addition we think. Who needs Google Earth, when you have Twitter combined with Google Maps! 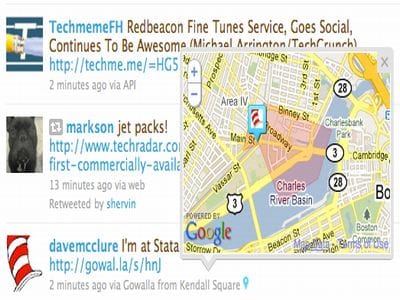