This last week we’ve had a few teases surrounding Google’s LG Nexus 4 and of course their event at the end of this month, which included a number of insiders passing rumors on as apparent fact, and one very dark photo that leaked on Twitter and claimed to be a picture of the upcoming LG Nexus 4.

We’ve embedded the photo below if you haven’t seen it already, which shows a smartphone said to be the LG Nexus 4 and the tweet, also seen in an image below, reveals what should be the specs for this handset. If we are to believe the rumor, leaked from well-known evleaks, then you can expect the new LG Nexus 4 phone to feature a 4.7-inch screen, 2GB of RAM, and a 1.5GHz quad-core processor.

The new LG Nexus phone expecting a 2012 launch will also include Jelly Bean out-of-the-box, two cameras at 1.3 megapixels and 8 megapixels, a not so impressive 2100mAh battery, and pack everything inside a 9.1mm form factor. It is worth noting that the LG Nexus 4 screen resolution will be 768×1280, and the processor is claimed to be a Snapdragon S4 Pro APQ8064. See the leaked details in the Twitter screenshot below. 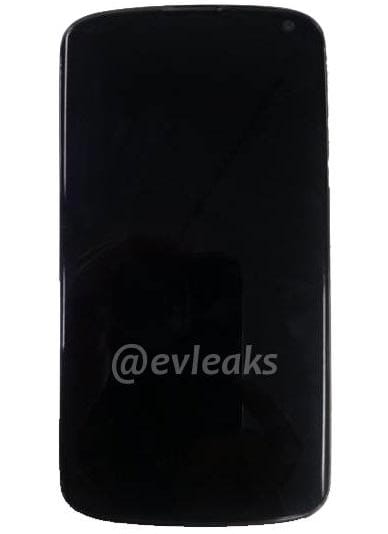 Would you be happy with an LG Nexus 4 packing these specs, or is there something lacking in your opinion? The Google event on Oct 29 should also include a reveal of Android 4.2 with full features being demonstrated on the LG Nexus 4, a Nexus 10 with a 2560Ã—1600 display that could improve on the iPad’s Retina, and we’ve also heard that Google will demo the 32GB Nexus 7. Rumors are pretty thin when it comes to the planned LG Nexus 4 release date, but November would be a safe bet considering the event is at the end of October.

Feel free to hit the comments with your expectations for prices, and also what you’d be willing to pay for any of the devices mentioned above?