Google has embarked on another quest to dominate in an alternative market to that of the search engines, as this time they try their hand at the movie industry. The company has just launched its film rental service for android owners in the UK, via the Android Market.

The British users of the Android tablets and phones can now rent movies to their devices over the internet using a Wi-Fi or 3G connection. There is currently a similar service available in the US and now the UK have a library of approximately 1000 hit movies available to them which they can rent for as little as £2.49. The library currently includes titles such as Reservoir Dogs and Harry Potter. More recent movies are also available such as Senna or Green Lantern, but they will initially cost a little more at £3.49.

As the Telegraph explains, the service is only available to Android users and to rent a movie they must first download the Videos app which is available for free on the Android Market. The films can then be downloaded and can be viewed even when you’re not online. Each purchase gets a 30 day period in which it must be watched, plus once viewing has begun the movie must be watched within 24 hours. There is no limit to how many times the movie can be watched in the 24 hour period.

If users have a HDMI cable they can also watch their movie rental on their TV or on their PC or laptop. There are currently similar services available in the UK such as Lovefilm; however Google will be hoping the ability to watch these films on mobile devices will be enough to appeal to more users. What do you think of Google’s new movie rental service? 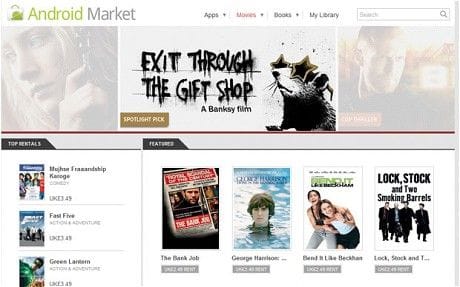