Google is always looking at ways to compete and then try to better rival services, so we were not surprised when they announced Google Keep, which will be in direct competition with OneNote and Evernote. It seems as though Google has made their ecosystem even larger, but is this new service any good?

The answer to that question cannot be answered just yet as it takes time, just like it has with Google+, and for the most part this social networking service has been well received. One of the key features of Google Keep is the benefit it offers to Google Drive because of its lightweight note-taking tool.

That’s not all as Google Keep syncs with Android devices, but things are not all what they seem. We say this because where Microsoft offers their service to all; Google Keep has its limitations, as it is only available to those with Google Drive and has an Android device, which will limit its growth.

Having said that, we should not worry too much, as the user base is still very large and it would be a different story if we were looking at a new service only dedicated to Windows Phone users. Then again, compared to its main rivals Google Keep will struggle to find its legs, well that’s the opinion from PC Mag.

While they say Google Keep adds notes, what they mean is the service adds note-taking as well as syncing to Drive, which could be very useful for those of you with Android devices, but there’s still no getting away from the fact that this service comes with limitations. 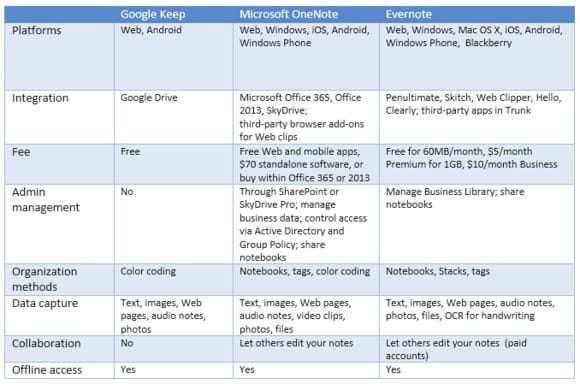 Those limitations are highlighted when Google Keep is pitted against Microsoft OneNote and Evernote, although Keep redeems itself in other keys areas, which can be seen in the diagram above. How would you rate Google Drive next to its competitors.

Thanks to PC World.