People have been wondering what to expect at Google I/O 2015, and so it is no surprise that rumors continue to mount. Some of the rumors we have been hearing about are pretty much on the money, while others are wishful thinking, and I am sure you will be able to filter through those bogus ones yourself.

We will give you a good example, as a fresh Google I/O 2015 rumor has come to light suggesting that Google will use this event to exploit the power of voice more, and so is set to announce a new feature called Voice Access.

This tool will allow for people to take more control of their apps by using voice, and what will be even better is that app developers will be asked to add further voice support within the app itself. Android Police has more details on this feature. 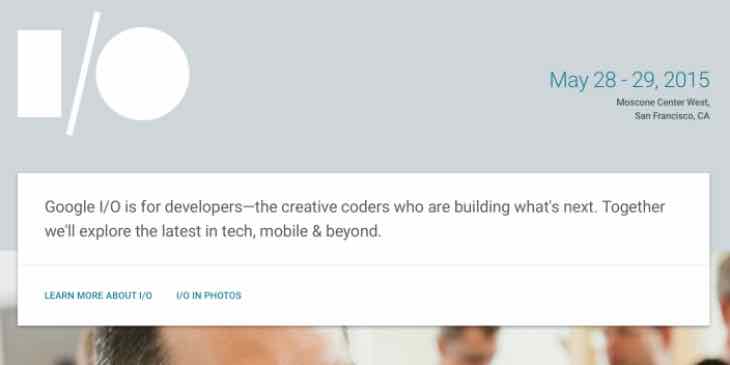 We also suspect that Google could use its I/O event as the perfect platform to announce an increase in smartphone support for Android 5.0 Lollipop. There is also a good possibility that Chrome OS could get a much-needed update, and while it might not be released over the duration of this month’s event, at least we might get to learn some of its upcoming features.

Google could also use this event as a platform to announce new wearables, seeing as though they now have tough competition from the Apple Watch. However, if you were hoping for Google to launch a new Nexus smartphone or tablet, then you might feel a little disappointed.

NDTV Gadgets has recently learned that Google might also introduce Android M 6.0 during the event, which is said to open things up to millions more devices around the globe.

This is just the tip of the iceberg of what to expect later this month, although these are some of the more plausible rumors we have been reading about. Visit the official webpage for the full schedule of events.